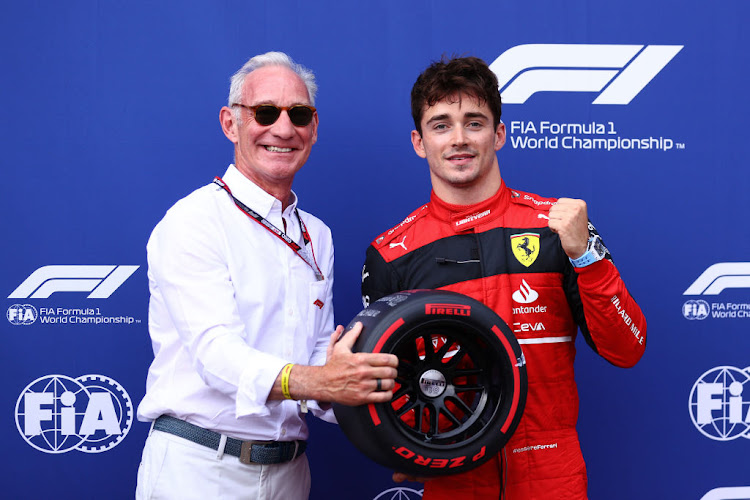 Pole position qualifier Charles Leclerc is presented with the Pirelli Pole Position trophy by Liberty CEO Greg Maffei during qualifying ahead of the F1 Grand Prix of Monaco at Circuit de Monaco on May 28, 2022 in Monte-Carlo, Monaco.
Image: Eric Alonso/Getty Images

Ferrari's Charles Leclerc secured pole position for his home Monaco Formula One Grand Prix for the second year in a row on Saturday after a crash halted qualifying with 30 seconds remaining.

Leclerc was joined on the front row by Spanish team mate Carlos Sainz, who was unable to complete his final lap after running into Mexican Sergio Perez's crashed Red Bull with the cars blocking the track.

The red flags came out and the session was not resumed.

Perez, who had to go to the medical centre for checks after the session, ended up third with world championship leading team mate Max Verstappen fourth on a tight street circuit where qualifying is crucial.

Only 10 times since 1950 has the showcase race been won by a driver starting lower than third.

"It is very special. I'm so incredibly happy. It's been a very smooth weekend until now, I knew that the pace was in the car and I just had to do the job," said Leclerc, who was fastest in Friday practice and can regain the overall lead on Sunday.

"It went perfectly. That last lap before the red flag was really, really good. Anyway, it didn't change anything for us. The car felt amazing and it's great to have Carlos with me on the front row."

The pole was Leclerc's fifth in seven races so far this season and third in a row.

"I don't think that pole was on today, Charles was mighty," said Red Bull boss Christian Horner. "We couldn't have done that time."

Leclerc is six points adrift of Verstappen after retiring with an engine problem while leading the previous race in Spain eventually won by his Dutch rival.

Leclerc took pole in Monaco last year after he suffered a late crash in qualifying, an accident that also brought out red flags, but he was unable to start the race due to a driveshaft failure.

The Ferrari driver has yet to score a point at home and is seeking to become the first Monegasque to do so since Louis Chiron finished third in 1950.

Lando Norris qualified fifth for McLaren, after shaking off the tonsillitis that affected him in Spain, and ahead of the Mercedes of fellow-Briton George Russell.