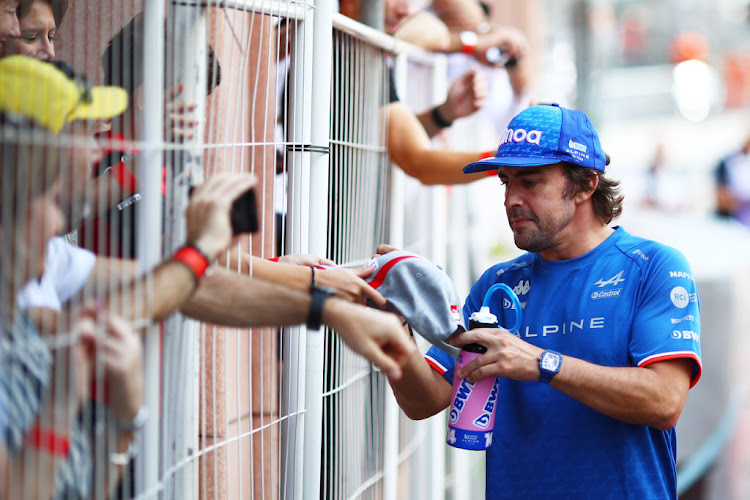 Fernando Alonso signs autographs for fans ahead of the F1 Grand Prix of Monaco at Circuit de Monaco on May 29, 2022 in Monte-Carlo, Monaco.
Image: Eric Alonso/Getty Images

Twice Formula One world champion Fernando Alonso said he was still feeling the effects of a qualifying crash in Australia last month and expected to suffer for months to come.

The Alpine driver had bandages on both wrists after Sunday's Monaco Grand Prix and told reporters they were a consequence of his Melbourne accident.

“It's still from Australia,” he said, referring to a crash into the wall at Albert Park.

“Bones, ligaments, tendons, everything is a mess at the moment.

“I need two or three months and there is no surgery, nothing you can do. Just rest. Unfortunately, every two weeks I have to drive so I try to rest at home but it will take a few months,” added the 40-year-old.

Formula One has six more races scheduled, divided into pairs of double-headers, before the August break.

When it was jokingly suggested that Alonso could hand his car to the Renault-owned team's Australian reserve driver Oscar Piastri, the Spaniard replied: “Yes, but we need the points.”

Alpine are sixth in the constructors' championship but only a point behind Alfa Romeo and 19 adrift of McLaren after seven races with the top three — Red Bull, Ferrari and Mercedes — way ahead.

Alonso finished seventh in Monaco, ahead of Mercedes' seven-time world champion Lewis Hamilton who was unable to find a way past on the narrow street circuit despite having a faster car and the Spaniard lapping well off the pace.

Alonso said his strategy in the final stint had been to manage the tyres for 15 laps before then pushing for the remaining 15 to the finish.

“It was Hamilton's problem,” he said. “This is Monaco and I love to keep people behind.”

After a rather frustrating showing at Zwartkops in April, it was time to reload and regroup at Gqeberha's Aldo Scribante Race Circuit for the the ...
Motoring
2 months ago

Formula One packed up after Sunday's Monaco Grand Prix with no certainty it would be back there next year, but offering plenty of advice on what ...
Motoring
2 months ago

Marcus Ericsson took the effective lead with 18 laps to go, survived a restart with two laps to go and held the lead the rest of the way en route to ...
Motoring
2 months ago