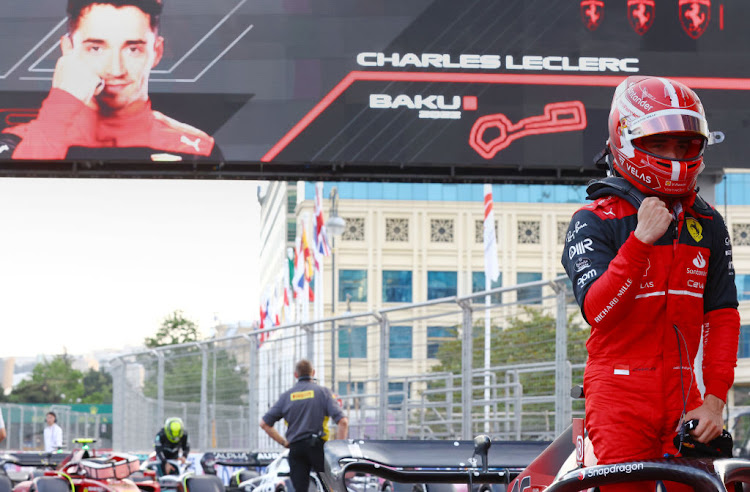 Ferrari's Charles Leclerc put in a blinding lap in Saturday's qualifying to seize pole position for the Azerbaijan Formula One Grand Prix.

The Monegasque lit up the timing screens with a 1:41.359 second lap, beating Red Bull's Sergio Perez by a handy 0.282 seconds.

His championship rival Max Verstappen, who holds a nine-point advantage over Leclerc in the overall standings, was third 0.347 seconds adrift, while Carlos Sainz in the other Ferrari was fourth.

Leclerc's performance on Saturday earned him his sixth pole from eight races so far this season, and fourth in a row.

It made the 24-year-old the first driver to take a repeat pole around the Baku street track, having also started last year's Azerbaijan race from the front. If he converts it on Sunday, it would make him the race's first multiple winner.

"This one I didn't expect and I thought Red Bull were stronger," said Leclerc, who now has 15 career poles.

"In the last lap everything came together."

Verstappen and Perez had taken turns at the top of the timesheets during the first two phases of qualifying.

But Perez reported an engine issue while his Dutch team mate, who let out a frustrated sigh over the team radio, said his car did not quite have the pace to take the fight to his Ferrari rival.

Red Bull's Sergio Perez edged out Ferrari's Charles Leclerc to put himself back on top in Saturday's final Formula One practice session for the ...
Motoring
3 weeks ago

Charles Leclerc pushed Red Bull rival Sergio Perez off the top of the time sheets to end Friday practice for the Azerbaijan Grand Prix with the ...
Motoring
3 weeks ago

Seven-time world champion Lewis Hamilton on Friday said he would not appear in a film starring Brad Pitt based on Formula One that the Mercedes racer ...
Motoring
3 weeks ago