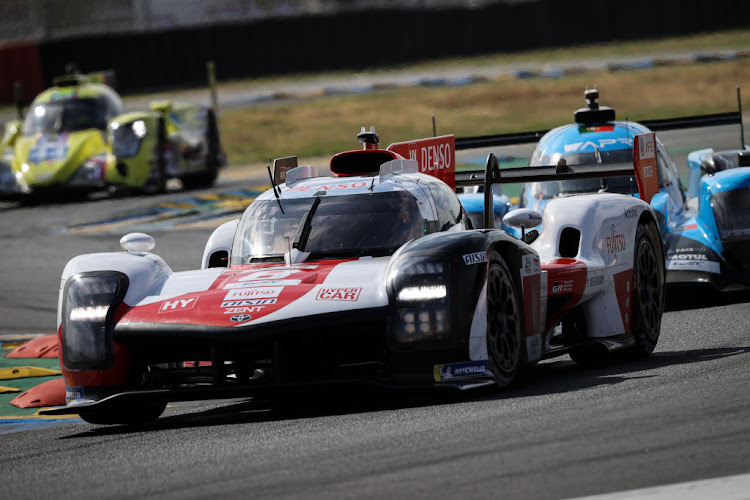 Champions Toyota led the 24 Hours of Le Mans into the night in one-two formation at the Sarthe circuit on Saturday, with the number seven and eight GR010 hybrid hypercars repeatedly swapping the lead.

Swiss driver Sebastien Buemi started the annual endurance race from pole position in the eight car before Britain's Mike Conway took over at the front in the number seven after the first pitstops.

After nine hours the number eight car was 26 seconds clear at the front.

Toyota are chasing their fifth Le Mans overall victory in a row and are favourites as the only major manufacturer in a field of five hypercars, the top category.

Three second tier LMP2 cars were involved in a collision at the first corner, with the number 22 United Autosports car driven by American Will Owen having to be lifted out of the gravel before re-joining.

The 90th edition of the race started in front of packed grandstands with the 62-strong field formally sent on their way by TotalEnergies chairman Patrick Pouyanne.

The field included the youngest ever competitor, 16-year-old American Josh Pierson with United Autosports in the second tier LMP2 category, and German-Irish Hollywood actor Michael Fassbender at the wheel of a Porsche 911.

Several ex-Formula One drivers are taking part along with reigning Formula E champion Nyck de Vries, a late replacement for Philippe Cimadomo after the 62-year-old Frenchman was excluded after repeat crashes.

Stewards said Cimadomo was a concern "for the safety of himself and other competitors".

There was also a pre-race lap of honour by the electric-hydrogen H24 prototype.

The entire field is running with a 100% renewable fuel for the first time.

The endurance race, which will celebrate its centenary next year, ends at 1400GMT on Sunday.

Ferrari's Charles Leclerc took pole position for the Azerbaijan Formula One Grand Prix on Saturday with Red Bull's Sergio Perez alongside on the ...
Motoring
3 weeks ago

Red Bull's Sergio Perez edged out Ferrari's Charles Leclerc to put himself back on top in Saturday's final Formula One practice session for the ...
Motoring
3 weeks ago

Hyperpole has delivered its verdict. The No.8 Toyota GR010 Hybrid of Toyota Gazoo Racing will start the 2022 24 Hours of Le Mans on Saturday in pole ...
Motoring
3 weeks ago