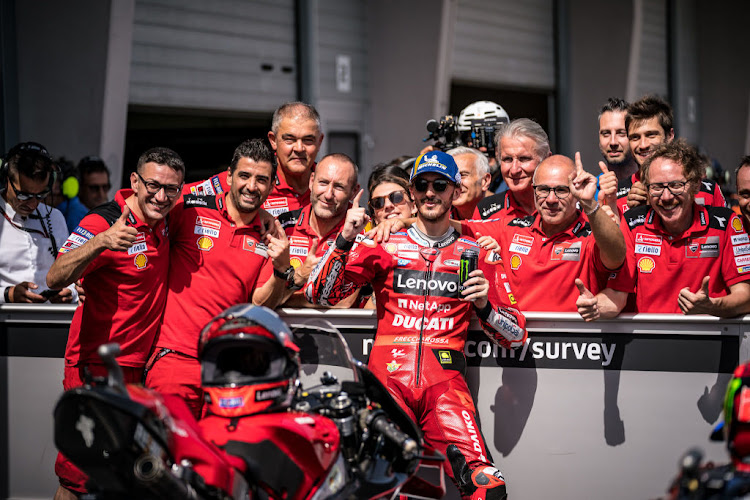 Ducati's Francesco Bagnaia set a lap record at the Sachsenring in practice and capped off his Saturday by grabbing his third pole position of the season to start at the front of the grid at the German Grand Prix.

On a track where Ducati have struggled in recent years, Bagnaia was the only rider to finish his qualifying lap inside the one minute 20 second mark (1:19.931).

Bagnaia, last year's runner-up in the championship, had set the lap record during FP3. He will be joined on the front row by two Frenchmen — Yamaha's world championship leader Fabio Quartararo and Pramac Racing's Johann Zarco.

“I'm happy, we've done a great job in these conditions. It's very hot and tomorrow will be even hotter. It was a great session,” Bagnaia said in a pit lane interview.

“I was surprised to start the week like this but the (good) feeling has grown session by session and now I feel very comfortable with everything.”

Aprilia's Aleix Espargaro, second in the standings, will start fourth on the grid alongside Fabio Di Giannantonio (Gresini Racing) and Ducati's Jack Miller, who could receive a grid penalty for crashing under yellow flags.

Gresini's Enea Bastianini, third in the riders' standings with three race wins this season, had another disappointing qualifying session as he failed to move into Q2 for a second straight grand prix and will start 17th on the grid.

Suzuki will have only 2020 champion Joan Mir competing for the Japanese team on Sunday after Alex Rins's withdrawal after the third free practice session due to a wrist injury.

Six-time MotoGP champion Marc Marquez won the last eight races at the Sachsenring but with the Honda rider sidelined after another surgery on his right arm, a new winner will be crowned on Sunday.

Formula One revved up for the first Canadian Grand Prix since 2019 with Max Verstappen setting the practice pace for Red Bull and Ferrari's Carlos ...
Motoring
2 weeks ago