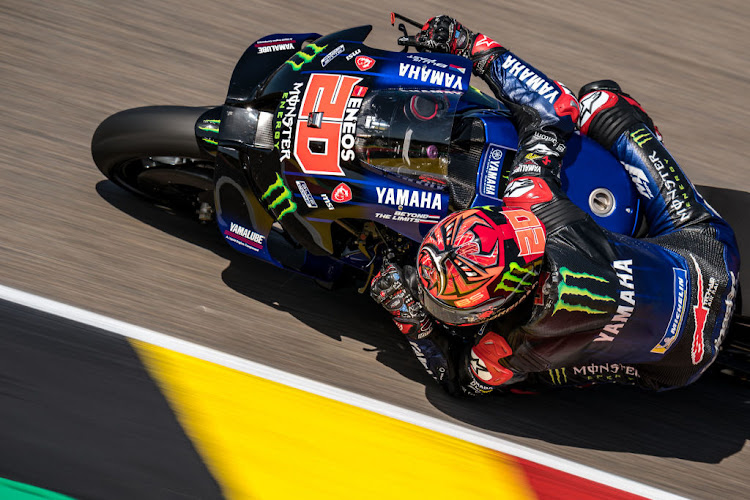 Yamaha's reigning world champion Fabio Quartararo won the German Grand Prix on Sunday to extend his lead in the riders' standings after a risky gamble on his rear tyre compound paid off.

Frenchman Quartararo, who started second on the grid, was one of just three riders to choose a medium rear tyre in very hot conditions while the rest of the field went with hard tyres to ensure they lasted longer at the Sachsenring.

Quartararo was quickest off the line, overtaking pole sitter Francesco Bagnaia of Ducati to take the lead at turn one as the pair sparred for first place and nearly made contact at one stage.

But three laps in, Italian Bagnaia lost his rear grip on a turn and crashed out of the race, dealing a huge blow to his chances of reeling in Quartararo in the riders' standings as the Frenchman cruised to victory.

"I feel tired, I was sick this weekend. I was coughing during the race. I have no words," Quartararo said in the post-race interview.

"We took a chance on the medium rear tyre, it was risky. But in the race we were lucky... I'm super happy!"

Quartararo's compatriot Johann Zarco of Pramac Racing briefly threatened to challenge him for the lead but ultimately settled for second place, while Ducati's Jack Miller capitalised on Aleix Espargaro's mistake late in the race to take third.

"When Pecco (Bagnaia) crashed, I tried to catch Fabio because I knew he was on the medium (tyre) but I could not.... The last few laps were a nightmare, I am tired," said Zarco, who was nearly bent over and panting in the paddock.

Aprillia's riders Espargaro and Maverick Vinales were involved in an intense battle for third but Australian rider Miller caught up at half a second a lap and he eventually climbed to fourth above Vinales with 13 laps to go.

Vinales, however, was soon forced to retire after his ride height device malfunctioned and remained stuck.

Miller, who had received a long lap penalty after his crash under a yellow flag in Saturday's qualifying, was a man on a mission and he ensured Ducati had a spot on the podium when he took third from Espargaro as the Spaniard went wide.

"I felt I had good pace, I just had to manage it," Miller said. "Aleix was riding well. I couldn't get past him until he made a mistake."

Quartararo now has 172 points after 10 races, 34 points ahead of Espargaro, while Zarco moved up to third to sit a further 27 points behind.

Red Bull's Formula One leader Max Verstappen shone in the wet to take pole position for the Canadian Grand Prix on Saturday as Alpine's evergreen ...
Motoring
2 weeks ago

Ducati's Francesco Bagnaia set a lap record at the Sachsenring in practice and capped off his Saturday by grabbing his third pole position of the ...
Motoring
2 weeks ago

Ferrari's Leclerc to start from the back of grid in Canada

Ferrari title contender Charles Leclerc will start from the back of the grid in Sunday's Canadian Grand Prix after picking up more penalties on ...
Motoring
2 weeks ago