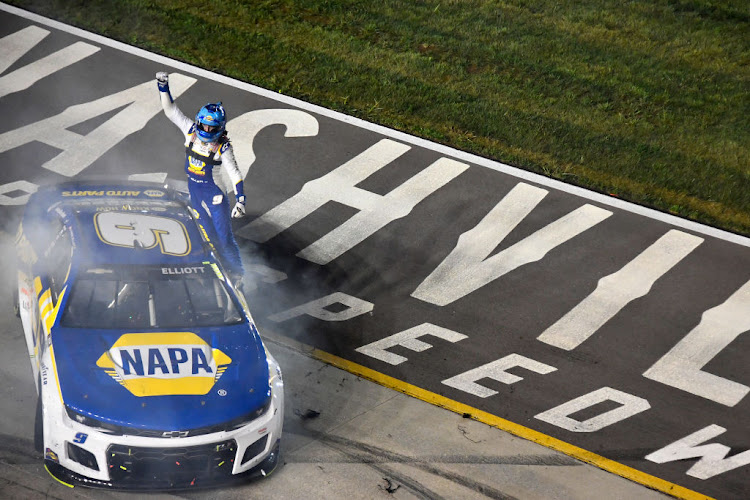 Chase Elliott stayed out on the final caution of the weather-interrupted Ally 400 Sunday and raced away from Kurt Busch to win at the Nashville Superspeedway in Lebanon, Tennessee.

After Josh Bilicki's No 77 brought out the race's 12th yellow flag, Elliott's team decided to stay out on tyres that were almost 50 laps old. But Elliott was able to keep his No 9 Chevrolet in front of the older Busch brother in a four-lap sprint on the way to his 15th career win and second of 2022.

His other victory was in May at Dover Motor Speedway — also a concrete track like Nashville's.

Kyle Busch started 36th but led twice for 54 laps and was in position to win in the final 100 laps before deciding to pit for two tires on the last caution. He came home 21st.

Polesitter Denny Hamlin led the first 41 laps before debris and a lightning strike around the track brought out the first caution and a one-hour red-flag condition for more lightning.

Within two laps of going back to green, two Hendrick Motorsports cars — the 24 of William Byron and the 48 of Alex Bowman — experienced troubles. Byron left the race with mechanical issues, while Bowman's Ally-sponsored Chevrolet suffered major damage after hitting the wall.

A second lightning strike and light rain forced another red flag to fly over the 1.33-mile concrete track with 140 laps in the books, just 10 short of making it an official race.

After the two-hour, eight-minute delay, Hamlin led the field on a Lap 151 restart with Joe Gibbs Racing teammates Truex and Kyle Busch behind him. Truex grabbed the lead on lap 171 and went on to another stage win.

Elliott overcame an early penalty and eventually secured the lead for good from Kyle Busch with 55 laps to go.

"We had kind of a setback there about halfway," said Elliott, who matched his Nascar Cup Series win total from last season. "We were able to get our NAPA Chevy dialled back in and get back in the mix. It was a long day, a fun day.

"We've had a pretty rough month and a half, so it's nice to get going back in the right direction. Getting the win is always huge. Doing it in a really cool city like Nashville is even better. Looking forward to that [trophy] guitar."

The McMurtry Spéirling is the new king of the hill at the Goodwood Festival of Speed.
Motoring
1 month ago

Gasly to stay at AlphaTauri for 2023 F1 season

Pierre Gasly will remain with AlphaTauri for the 2023 season, the Formula 1 team announced on Friday.
Motoring
1 month ago