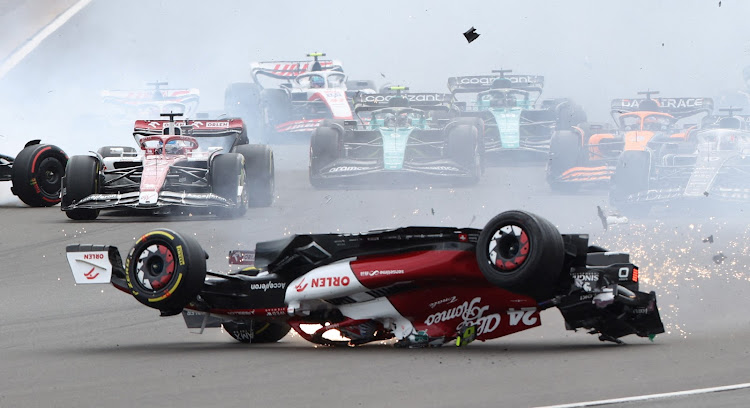 Zhou Guanyu was saved by the halo device but the roll hoop was ripped off.
Image: Reuters

Formula One's governing body said on Friday it will introduce tougher tests on the roll hoops of cars next season as a result of Chinese driver Zhou Guanyu's big British Grand Prix crash.

Zhou's Alfa Romeo flipped and skidded upside down along the track at Silverstone, with the roll hoop ripped off, before flying across a tyre wall and becoming wedged between the barriers and catch fence.

The rookie escaped unscathed, his head protected from serious injury by the titanium halo device that rings the cockpit.

“The teams confirmed their availability to introduce more stringent measures on the roll hoops for 2023, and the FIA undertook to complete the relevant analyses and to communicate to the teams new requirements for the safety of the roll hoop,” it said.

The TAC also discussed the vertical oscillation of cars, commonly known as “porpoising” — bouncing at speed like the movement of a porpoise through water.

The aerodynamic phenomenon has been a consequence of this year's major rules overhaul.

Champions Mercedes have been particularly affected, though they appear to have resolved some of the worst effects, and the FIA warned there was a risk of a more serious problem next season.

“While the issue has been seemingly reduced in the last few races, they took place at circuits where the effect is expected to be lower than normal,” the governing body explained.

“Races where this effect is expected again to be higher will take place in the coming months.

“While the teams are understanding more and more how to control the issue, the tendency for 2023, with the cars developing more downforce, will most likely be a worsening of the effect.”

It said measures to be put in place from next month's Belgian Grand Prix were not necessarily a long-term fix and the FIA would introduce further changes for 2023.

Six times the Formula One halo saved the day

Safety in motorsport has been thrust into the limelight once more with the dramatic Guanyu Zhou crash at this past weekend’s British Grand Prix.
Motoring
1 month ago

Briton George Russell said natural instinct drove him to jump out of his Mercedes to check on Chinese racer Guanyu Zhou after a crash on the opening ...
Motoring
1 month ago