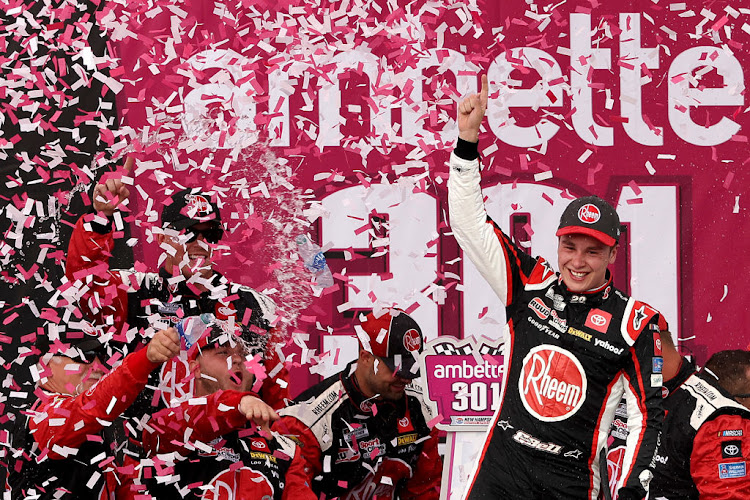 Christopher Bell ran down Chase Elliott with 42 laps remaining to win for the second time in the NASCAR Cup Series, claiming Sunday's Ambetter 301 at New Hampshire Motor Speedway in Loudon.

Bell took four tyres on the final caution period with 97 laps to go. Then the Norman, Oklahoma, native moved his No 20 Joe Gibbs Racing Toyota in position to catch Elliott, the race leader who had fought hard to pass Kurt Busch.

Bell, in his third season with JGR, easily cruised past Elliott – seeking a fourth Cup triumph in 2022 – and jetted away to win by nearly six seconds for his second victory in 92 career starts. His other win was on the Daytona road course on February 21 2021.

"That one was much needed right there," said Bell, 27, who earned a spot in the championship playoff.

By winning, Bell bumped Truex onto the bubble for one of the 16 playoff spots. He also became the 14th different victor this season. The 14 different winners through 20 races matched a NASCAR record that also occurred in 1950, 2002, 2003 and 2011.

"It just seems like we've been so close then we (fell) off a little bit last week. I was talking to my best friend and told him, ‘Earlier in the year, I felt like we were right on the verge of winning. Then the last couple of weeks I felt like we were far away.'"

It also marked Bell's fifth victory at New Hampshire in national series competition. He previously won there three times on the Xfinity Series and once on the Camping World Truck Series.

Earning his 20th career pole but first in four seasons, Truex led the 36-car field to the green flag. Truex, a teammate of Bell's at JGR, dominated and led a race-high 173 laps, but his No 19 Camry became ill-handling after Truex took two tyres instead of four on the final round of pit service.

With only seven regular-season races remaining, the drivers raced close early to try and gain a postseason berth. Ty Dillon created a four-car wreck in the first five laps, knocking out the No 48 Chevrolet of Alex Bowman (35th-place finish, third DNF in past four races).

In Stage 1, Truex turned the 70 laps around the 1,702km speedway into a Sunday drive. The New Jersey native, who honed his skills racing in the Northeast, won the first segment by almost five seconds over Wallace.

Despite Joey Logano staying out and gaining the lead, Truex reclaimed the point under green flag racing and again pulled away to a big advantage for a win in Stage 2, his seventh this season.