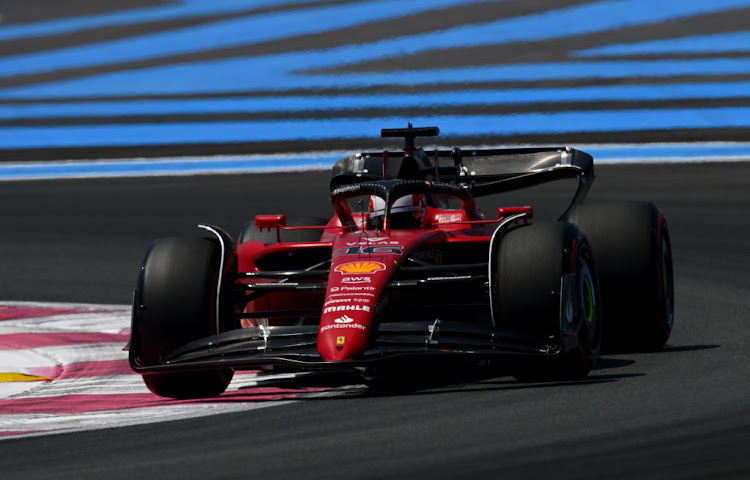 Charles Leclerc on track during practice ahead of the F1 Grand Prix of France at Circuit Paul Ricard on July 22, 2022 in Le Castellet, France.
Image: Dan Mullan/Getty Images

Ferrari made a strong start to the French Grand Prix weekend, and their bid for a third win in a row, on Friday with Charles Leclerc fastest in first practice at Le Castellet.

The Monegasque, the most local of any of the drivers who will be competing in Sunday's race and winner of the previous round in Austria, lapped with a best time of 1:33.930 seconds on the soft tyres.

Ferrari's Carlos Sainz, winner of this month's British Grand Prix, was third on the timesheets but the Spaniard will have a grid penalty of at least 10 places after Ferrari changed his car's control electronics.

All teams are obliged under new rules to run drivers with limited Formula One experience in two Friday free practice sessions this season.

De Vries ended the session with the ninth fastest time.

Team boss Toto Wolff said Hamilton, watching the new occupant of his car from the pitwall before his 300th race, had been helping de Vries.

Frenchman Pierre Gasly was fifth, ahead of Red Bull's Mexican Sergio Perez, who spun at turn three but managed to keep his car out of the barriers.

McLaren's Lando Norris was seventh fastest and again outperformed his Australian teammate Daniel Ricciardo in 10th place, with the team bringing plenty of new parts to the Paul Ricard circuit.

Polish reserve Robert Kubica replaced Valtteri Bottas at Alfa Romeo for the session and was 19th of 20.

Formula One must retain "iconic" tracks lsuch as Belgium's Spa-Francorchamps even if the trend is towards more lucrative street circuits, according ...
Motoring
2 weeks ago

Four times Formula One world champion Sebastian Vettel said on Thursday he was talking to Aston Martin about staying with them next season, and ...
Motoring
2 weeks ago