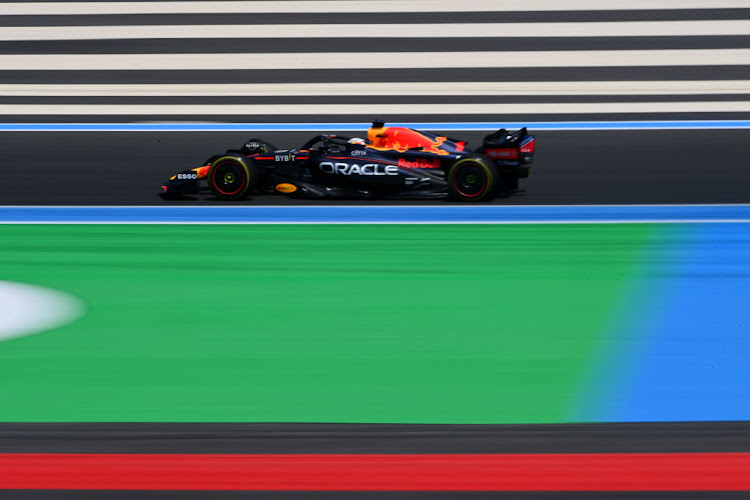 Max Verstappen on track during final practice ahead of the F1 Grand Prix of France at Circuit Paul Ricard on July 23, 2022 in Le Castellet, France.
Image: Dan Mullan/Getty Images

Formula One world championship leader Max Verstappen found some extra pace to go fastest for Red Bull in final practice for the French Grand Prix at Le Castellet on Saturday.

The Dutch 24-year-old lapped the Circuit Paul Ricard in 1:32.272 seconds on the soft tyres, with Ferrari's Carlos Sainz 0.354 slower after setting a scorching pace on Friday.

Sainz represents no threat to Verstappen, however, since the Spaniard has to start from the back of the grid due to engine penalties after his fiery retirement in Austria two weeks ago.

Ferrari's Charles Leclerc, Verstappen's closest title rival, was third fastest on the time sheets but a hefty 0.637 slower than the Red Bull driver who will be favourite for pole position in later qualifying.

The Monegasque, who suffered a big spin, complained that his car's soft tyres were “dead on the second lap. I don't know why”.

Seven-time world champion Lewis Hamilton was fourth fastest for Mercedes with Verstappen's team mate Sergio Perez fifth, but more than a second off the pace, and George Russell sixth for Mercedes.

Hat-trick chasing Ferrari made a strong start to the French Grand Prix weekend on Friday, with penalty-hit Carlos Sainz leading Charles Leclerc in ...
Motoring
2 weeks ago

Mercedes cannot do much to help Nyck de Vries secure a F1 drive and may let him go, team boss Toto Wolff said after the Dutch reserve replaced Lewis ...
Motoring
2 weeks ago

Formula One must retain "iconic" tracks lsuch as Belgium's Spa-Francorchamps even if the trend is towards more lucrative street circuits, according ...
Motoring
2 weeks ago