Leclerc on pole in France with Verstappen alongside 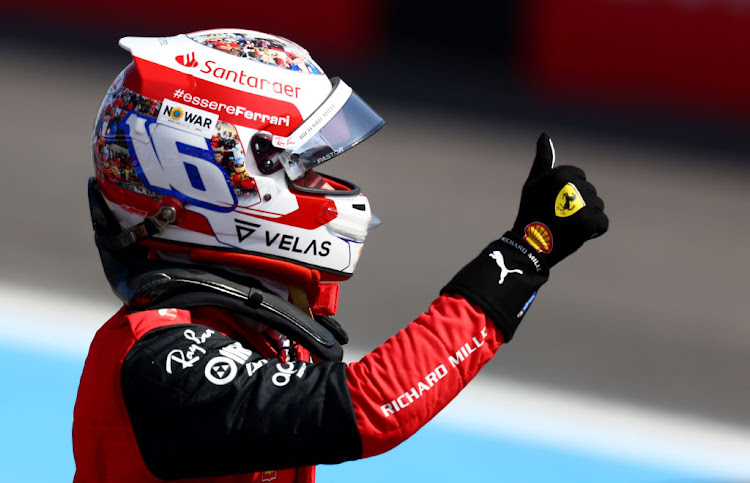 Spaniard Sainz, who already knew he would be starting at the back on Sunday due to engine penalties, 'towed' Leclerc in his slipstream at Le Castellet's smooth-surfaced Circuit Paul Ricard.

The extra speed made a difference.

"It was a great lap. I’ve struggled all weekend to put a lap together and I managed to put it," said Leclerc, who is second overall but 38 points adrift of Verstappen in the standings after 11 of 22 races.

"I also had the help of Carlos and that was amazing teamwork, because without Carlos it would have been much more close," added the Monegasque.

"So huge thanks to Carlos and I hope that he can join us back in the fight for the win tomorrow."

The pole was Leclerc's seventh of the season and 16th of his career.

Every race at Le Castellet since the southern French circuit returned to the calendar in 2018 has been won from pole.

Leclerc's time of 1:30.872 seconds was 0.304 quicker than Verstappen but Ferrari will have both Red Bulls chasing one car and Sainz will be unable to provide further assistance on what could be a hot and windy Sunday afternoon.

Ferrari are seeking their third win in a row, and fifth of the season, after Leclerc triumphed in Austria two weeks ago and Sainz the weekend before that.

"I think we were lacking a bit in qualifying, just general grip," said Verstappen.

"It was a bit more tricky than I think I would have hoped but overall I think we still have a decent race car and hopefully tomorrow will come into our favour. We're quick on the straights so we can use that tomorrow."

Team boss Christian Horner said Verstappen might have been a 10th, or a 10th and a half, closer without Leclerc getting the tow over the single lap.

"We've got two very different concepts of attacking this racetrack this weekend," he added. "Ferrari are running a little bit more downforce, we're a bit more trimmed out. It's all about tomorrow.

"We've got two versus one which is always an interesting strategic dynamic."

Mercedes had hoped to take the fight more to the top two teams but in the end the second row was the closest they could manage.

"At the end the overall package is just not quick enough, we can see that," said Mercedes team boss Toto Wolff, who felt Hamilton had extracted more from the car than could have been expected.

Sainz and Ferrari-powered Haas driver Kevin Magnussen qualified ninth and 10th but both will drop to the back, promoting McLaren's Daniel Ricciardo and Alpine's Esteban Ocon into the top 10.

"Obviously because of the penalty, the target was to get to Q3 (the final phase) and give the tow to Charles, which I think I did pretty well – I think it was pretty nailed – and I’m happy for the team," said Sainz.

McLaren boss Andreas Seidl said the session showed his team had made a clear step up with their car upgrades.

Sainz and Magnussen go to back of grid in France

Ferrari's Carlos Sainz and Haas driver Kevin Magnussen will start Sunday's French Formula One Grand Prix at Le Castellet from the back of the grid ...
Motoring
3 weeks ago

Formula One world championship leader Max Verstappen found some extra pace to go fastest for Red Bull in final practice for the French Grand Prix at ...
Motoring
3 weeks ago