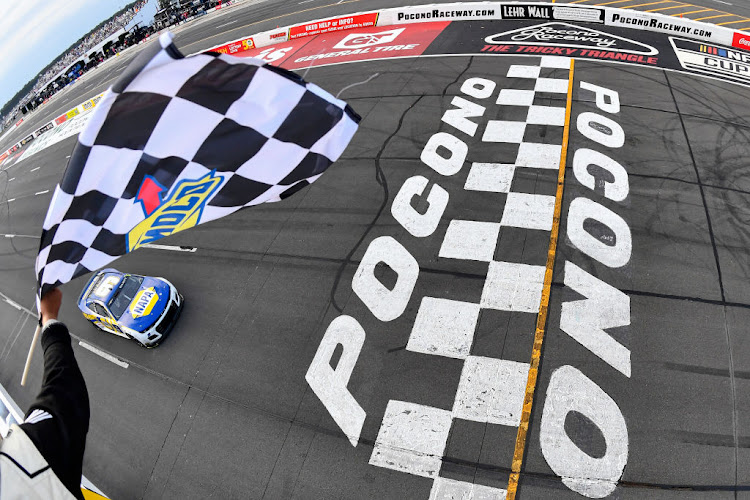 Chase Elliott crossed the finish line third but was declared the winner of the M&M's Fan Appreciation 400 after Denny Hamlin and Kyle Busch were disqualified at post-race inspection on Sunday afternoon at Pocono Raceway in Long Pond, Pennsylvania.
Image: Logan Riely/Getty Images

Chase Elliott crossed the finish line third but was declared the winner of the M&M's Fan Appreciation 400 after Denny Hamlin and Kyle Busch were disqualified at post-race inspection on Sunday afternoon at Pocono Raceway in Long Pond, Pennsylvania.

Hamlin appeared to have won when he battled past nemesis Ross Chastain in a late-race restart and pulled away from Joe Gibbs Racing teammate Busch over the final 13 laps, with Busch finishing second.

But Hamlin's No 11 Toyota and Busch's No 18 Toyota failed post-race inspection. NASCAR Cup Series managing director Brad Moran told reporters there was illegal material in the front fascia of both cars.

Moran said the drivers are allowed to appeal the disqualification.

Had the original results stood, Hamlin would have tied Elliott for the Cup Series points lead. Instead, Elliott grew his lead by picking up his fourth win of the season and his third over the past five races. Elliott has finished first or second in each of the past five weeks.

Paired on the front row with Chastain, who has had multiple run-ins with the No 11 car that has created tension between the drivers, Hamlin held a tight, high line off Turn 1 out of the race's next-to-last restart with 18 laps to go.

Chastain then lost control of his No 1 Chevrolet, hit the wall and slid down into Kevin Harvick's Ford, forcing Chastain out of the race.

While there were mostly cheers for Hamlin, some boos were mixed in from the Pocono crowd.

"What did you want me to do? What did you expect me to do?" asked an incredulous Hamlin, who received a hug from daughter Taylor and then drove her around the track on a victory lap with her holding the checkered flag on the passenger side.

"We got position on him, and he just ran out of racetrack," he said.

"We're just going to keep racing hard until we get the respect back from these guys. We've been wrecked four times, twice while leading, in the last 10 months. And I'm at the end of it.

"(That wreck) is something that's been owed to me for a few months now," said Chastain, who ended up 32nd.

"I've been owed that and probably some more for a few months now."

When asked if the score was settled, Chastain struggled to find an answer, smiled and replied: "I don't know."

Had Hamlin not been disqualified, it would have been his seventh at the odd-shaped, triangular track, which would have broken a tie with Hall of Famer Jeff Gordon and put the Chesterfield, Virginia, native into the all-time lead.

Kurt Busch, a three-time Pocono winner, missed the race because of a concussion suffered on Saturday in a qualifying crash. Xfinity Series points leader Ty Gibbs made his Cup debut and finished 16th in the No  45 Toyota.

Running 18th in the 30-lap first stage, Ford driver Austin Cindric spun off turn 2 and struck the pit road wall for the first caution of the race that featured 160 circuits around the 4,02km speedway.

Hamlin, the race's polesitter, brought out the fourth caution when his No  11 turned around on the tunnel turn's apron, but the Toyota was not damaged.

Chastain took the lead on Lap 124 due to a pit stop that was nearly three seconds faster than Kyle Busch's.

However, Ryan Blaney caused the eighth caution period with 23 laps to go when he lost the back end of his No  12 Ford and went head-on into the front stretch's inside wall, setting up the eventual encounter between Hamlin and Chastain.

Verstappen victorious in France after Leclerc crashes out

Red Bull's Max Verstappen won the French Grand Prix on Sunday and took a huge stride towards his second Formula One title after Ferrari's Charles ...
Motoring
3 weeks ago