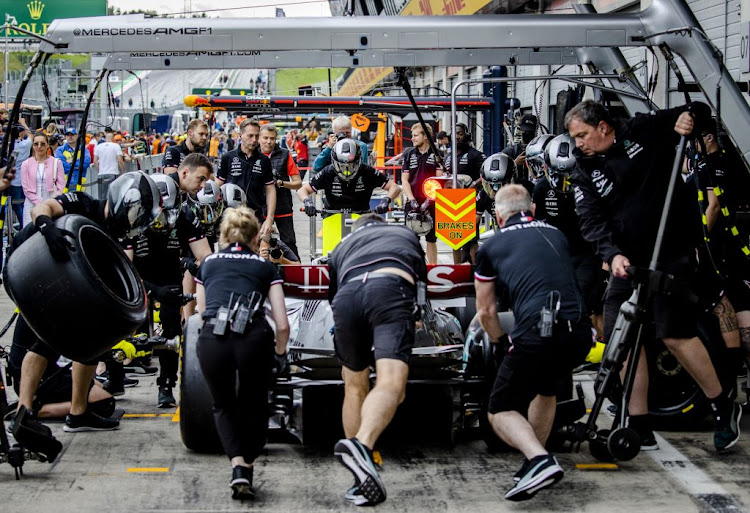 Running sustainable fuel is all part of F1's plan to have a net-zero carbon footprint by 2030.
Image: ANP via Getty Images

Formula 1 is on schedule to use 100% sustainable fuel in its race cars by 2026, according to managing director of motorsports Ross Brawn.

F1 cars are using E10 fuel this year that includes 90% fossil fuel and 10% ethanol. Meanwhile, a "drop-in" fully sustainable fuel is being developed with a goal of not having to modify the engines that run it.

That means transitioning to fully sustainable fuel without sacrificing speed.

"We're working on an E fuel where the carbon circle is completely neutral so the carbon used to produce that fuel is the same quantity as the carbon emitted from the internal combustion engine," Brawn said on Tuesday.

"It means the engines do not add anything to carbon dioxide in the atmosphere."

Brawn said making the fuel available to a wider consumer base would help reduce global emissions. Beyond passenger vehicles and race cars, internal combustion engines are critical to air and sea travel along with vehicles transporting heavy goods.

The sustainable fuel project is being led by F1's chief technical officer Pat Symonds. According to F1's studies estimate, only 8% of the 1.8-billion cars projected to be on the roads in 2030 will be fully electric.

"We've been working with Aramco and have tested 39 surrogate blends of fuels," Symonds said.

"This has helped us understand the effects of the different types of blends you can use in a sustainable fuel.

"The techniques we will hone and make more efficient and mainstream to produce our fuels are exactly the same techniques that can produce the fuel for trucks, trains and  aircraft, even if those fuels are slightly different."

Formula One driver Sergio Perez is entering his own Mexican team in an all-electric racing boat championship due to start next year, organisers said ...
Motoring
3 weeks ago

Formula One teams say they need a quick decision, preferably before the August break, on proposed 2023 technical changes that aim to end the sport's ...
Motoring
3 weeks ago