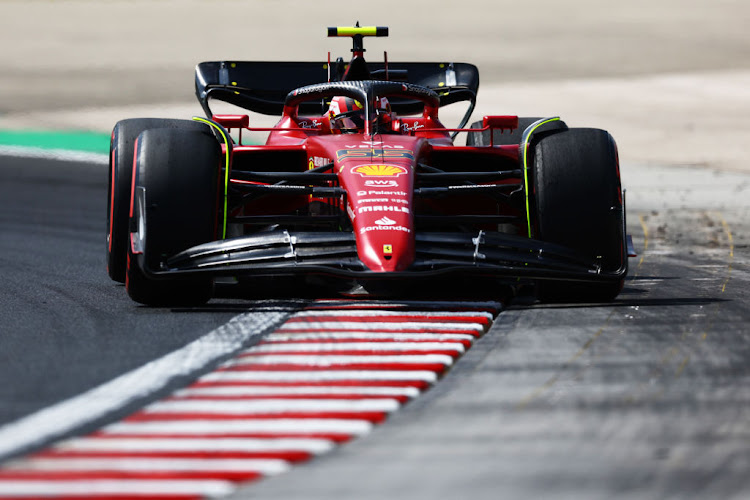 Carlos Sainz on track during practice ahead of the F1 Grand Prix of Hungary at Hungaroring on July 29 2022.
Image: Francois Nel/Getty Images

Spaniard Carlos Sainz was fastest for Ferrari on Friday in first practice for the Hungarian Grand Prix, with Red Bull's Max Verstappen denying the Italian team a one-two on the timing sheets.

British Grand Prix winner Sainz lapped the Hungaroring with a quickest time of 1:18.750 seconds, with championship leader Verstappen 0.130 slower on a track expected to favour Ferrari.

Ferrari's Charles Leclerc, the Dutch driver's closest championship rival despite being 63 points adrift after crashing out while leading in France last weekend, was third and 0.289 off the pace.

McLaren's Lando Norris was fourth on the soft tyres, ahead of Mercedes' George Russell and Red Bull's Sergio Perez, who complained over the radio of "a bit of an allergy" after suffering a very public sneezing fit at speed.

Aston Martin experimented with an eye-catching new rear wing and had Sebastian Vettel 11th fastest a day after the four-times world champion announced his retirement at the end of the season. Teammate Lance Stroll was 12th.

Haas also rolled out an updated car for Denmark's Kevin Magnussen with some striking aerodynamic similarities to the Ferrari.

Sunday's race is the 13th of 22 this season and the last before the August break.

Why Vettel will leave the F1 grid with respect and affection

Sebastian Vettel's greatest success is a distant memory, but the four times world champion will leave Formula One at the end of this year with more ...
Motoring
2 weeks ago