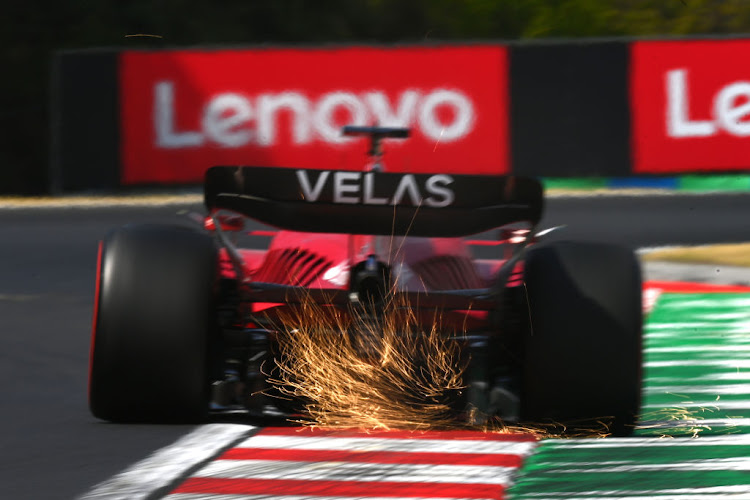 Charles Leclerc on track during practice ahead of the F1 Grand Prix of Hungary at Hungaroring on July 29, 2022 in Budapest, Hungary.
Image: Dan Mullan/Getty Images

Ferrari topped the time sheets in both practice sessions for the Hungarian Formula One Grand Prix on Friday with Charles Leclerc bouncing back to end the day quickest after team mate Carlos Sainz set the early pace.

Leclerc, who crashed while leading the previous race in France from pole position, lapped in 1:18.445 seconds on low fuel and soft tyres after Sainz led the first session in 1:18.750.

Ferrari could not manage a one-two, with Red Bull's runaway championship leader Max Verstappen second fastest in practice one and McLaren's Lando Norris in the later session.

Verstappen was 0.130 off Sainz's pace while Norris was 0.217 slower than Leclerc.

Leclerc is Verstappen's closest championship rival but a hefty 63 points adrift going into the last race before the sport's August break.

Norris was fourth fastest in the first session, with his Australian team mate and 2014 Hungarian GP winner Daniel Ricciardo ending up fifth in practice two.

“Things are feeling good, the car's in a good place,” said Norris. “It seems to be suiting this track a little bit more but we're always a little bit quicker in FP2 than we end up being normally.

“Everyone else and especially Ferrari, Red Bull and Mercedes normally step it up a lot for tomorrow ... I'm not expecting to be fighting for pole or anything.”

Alpine's Fernando Alonso, the double world champion celebrating his 41st birthday at the track where he took his first win with Renault in 2003, was sixth in the later session.

Verstappen's team mate Sergio Perez, who complained over the radio of “a bit of an allergy” after suffering a very public sneezing fit at speed early on, was sixth and ninth respectively.

Struggling champions Mercedes had a difficult day, with seven-time world champion Lewis Hamilton predicting a tough weekend, when rain is forecast at the Hungaroring outside Budapest.

“We came in wanting to do some experiments with the car and I think the ones we did in FP2 with both (drivers) have taken us backwards,” Mercedes' trackside engineering director Andrew Shovlin told Sky Sports television.

“There's a couple of things I'm pretty certain we're going to be undoing overnight because it didn't look great.”

Hamilton, a record eight times winner in Hungary, was seventh initially and 0.960 off Sainz's time before ending session two 11th and 1.102 slower than Leclerc.

“The car was a bit of a struggle today,” said Hamilton, who was second in France. “It's crazy how it swings so much from track to track.”

Aston Martin experimented with an eye-catching new rear wing, and had Sebastian Vettel 11th and seventh, a day after the four-time world champion announced his retirement at the end of the season.

Haas also rolled out an updated car for Denmark's Kevin Magnussen with some striking aerodynamic similarities to the Ferrari.

Spaniard Carlos Sainz was fastest for Ferrari on Friday in first practice for the Hungarian Grand Prix, with Red Bull's Max Verstappen denying the ...
Motoring
2 weeks ago