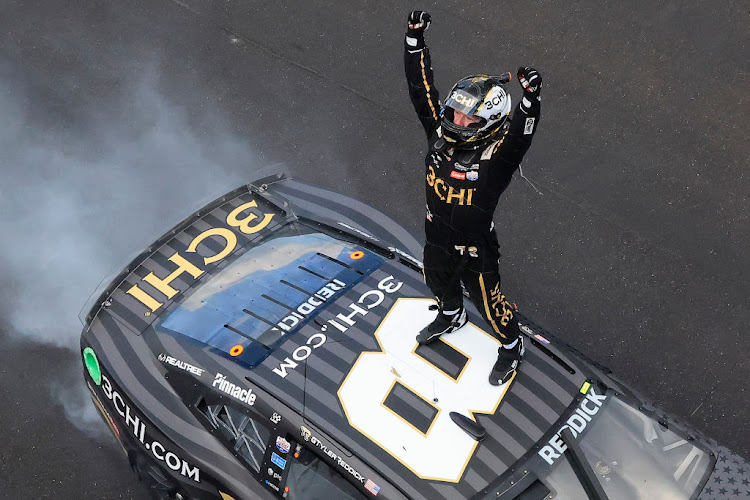 When Tyler Reddick won for the first time in the NASCAR Cup Series, it was a monumental task.

His result on Sunday was also pretty special.

Reddick mastered a road course for the second time in July, withstanding late restarts to win the Verizon 200 at the Brickyard at Indianapolis.

"Glad to be able to do it here in Indianapolis," Reddick said.

"This is one really special place to race, and I am excited to kiss the bricks here in a  bit."

The last half of the 86-lap race was largely a showcase for Reddick at Indianapolis Motor Speedway's road course.

Reddick held more than a 3-second lead and appeared to have a clear path to victory. But with four laps to go, a blown tyre on Christopher Bell's car resulted in track debris and a caution. That set the stage for a potential showdown between Reddick and Chase Elliott.

Elliott spun in the first turn of the restart. The ensuing mess resulted in another restart.

Chastain's illegal manoeuvre put him in front of Reddick, but it didn't matter because of the obvious violation.

"I thought we were four wide and couldn't go any farther right, and decided to take the NASCAR access lane out there," Chastain said when explaining his costly move.

Reddick claimed his first Cup Series victory in the first race of the month, also on a road circuit, when he prevailed at Road America in Elkhart Lake, Wisconsin. Elliott ended up second on that day, but finished 16th following Sunday's late bad luck.

Reddick was the pole-sitter, but Elliott had won two of the past three Cup Series events and three of the past five. They were the focus for much of the race.

"We know what we're capable of, and we did that at Road America," Reddick said.

"If we change nothing, we keep working really hard, we find a way back to Victory Lane."

Reddick grabbed the lead on the 50th lap, but headed to the pits on the next lap, putting Ryan Blaney in front.

After a series of pit stops, Reddick was back in the lead.

The first caution because of an accident came on the 62nd lap after 2021 series champion Kyle Larson, racing on his 30th birthday, went over the curb and rammed Ty Dillon's car in what appeared for an instant might be a head-on collision. Dillon exited with significant damage to the car.

"It was an impact unlike anything I've felt in my life," Dillon said.

"Just a string of bad luck we've had this season."

The biggest edge in that restart went to Ryan Blaney, who moved to the second-place spot, and Bell dropped from second to sixth.

Aric Almirola was the first driver to fall significantly off the lead lap pace because of a flat tyre.

With about a dozen laps remaining, Alex Bowman was black-flagged with his car's hood coming loose.

Chase Elliott crossed the finish line third but was declared the winner of the M&M's Fan Appreciation 400 after Denny Hamlin and Kyle Busch were ...
Motoring
3 weeks ago

NASCAR will hold its first Cup Series street race in downtown Chicago in July 2023, the stock car racing circuit said on Tuesday, as it continues to ...
Motoring
4 weeks ago

Christopher Bell ran down Chase Elliott with 42 laps remaining to win for the second time in the NASCAR Cup Series, claiming Sunday's Ambetter 301 at ...
Motoring
1 month ago