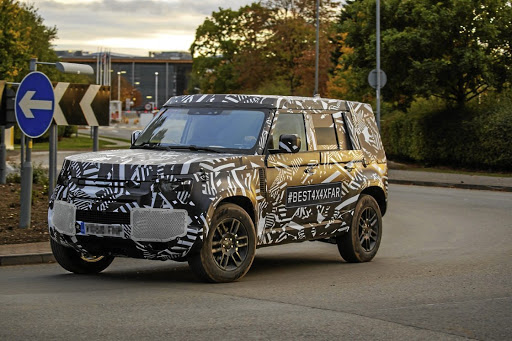 Disguised vehicle reveals the new Defender will have the iconic boxy shape.

New shots of a camouflage-clad new Defender have surfaced. Land Rover officials have confirmed it will arrive in 2020 and just like the classic 1948 model, it’s a dominant box shape once more.

The Defender was previously spotted as a test mule that was actually a shortened Range Rover Sport body on new Defender running gear. These pictures of a camouflaged test vehicle snapped in the British Midlands last week reveal the shape and dimensions of the production Defender for the first time.

The spy pics also show evidence of independent rear suspension — and that is a principal diversion from the solid axle of the old car.

The new Defender has had a long gestation as Land Rover has tried to launch a modern successor with a styling link to the iconic original, which ended production in January 2016.

The new vehicle seems to bear little resemblance to the negatively received DC100 concept launched at the 2011 Frankfurt Motor Show.

Along with this longer wheelbase Defender 110 model, Land Rover is said to be also developing a shorter Defender 90. Technical details are scant, but Land Rover has previously stated that the new Defender would be even more off-road capable than its legendary predecessor, and it’s likely to be aluminium-bodied.