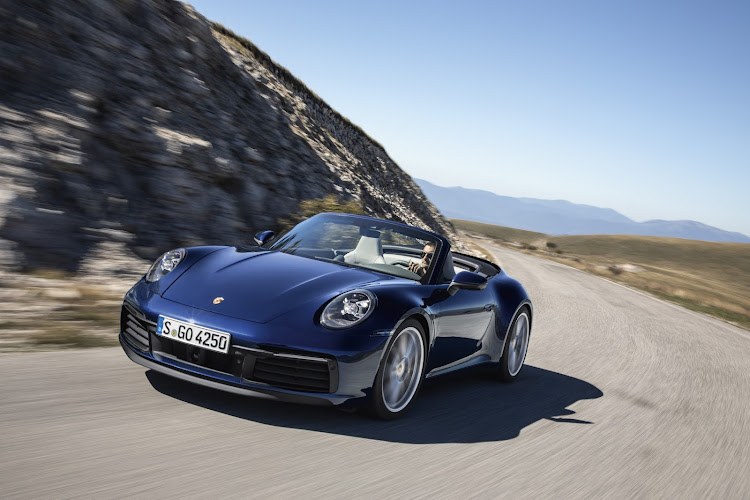 Just four months after launching the new 911 coupe, the eighth generation of Porsche’s timeless sports car has now been unveiled in Cabriolet form.

The drop top, making its official debut at the Geneva motor show later this week, is available as the rear-wheel-drive Carrera S Cabriolet and all-wheel-drive 4S version with its twin-turbo boxer six-cylinder 3l engine producing 331kW power and 530Nm torque through an eight-speed dual-clutch transmission.

This, claims Porsche, is good enough for a top speed of over 300 km/h and acceleration of 0-100 km/h in less than four seconds.

The weight of the soft top has been optimised, and it now takes only 12 seconds to open or close, at driving speeds up to 50 km/h. Made predominantly from magnesium, the high-tech structure of the soft top prevents the roof from ballooning even at high speeds.

The 911’s iconic shape remains instantly recognisable but it’s been fine-tuned with features  such as flush door handles, wider wheel housings arching over the 20-inch front wheels and 21- inch rears, and a new light bar connecting the tail lights. The rear wheel arches are now flared to give even the basic Carrera S muscular haunches like its more powerful brethren.

Inside, the dash has been redesigned to have the more horizontal emphasis of bygone 911s. The central analogue rev counter upholds long-held Porsche tradition in the otherwise digitised cabin, while the obligatory touchscreen interface is complemented by physical buttons to quick-access some functions.

New technology includes a Wet Mode that detects a moist surface and adjusts the stability control to suit, along with deploying the electrical rear wing for more downforce.

From booming bass to collaborating with rockers Linkin Park, the world's carmakers are looking for the best way to give EV's a voice.
Motoring
2 years ago