FIRST DRIVE | Mercedes EQC has Jaguar I-Pace in its sights

300kW electric car to arrive here in the fourth quarter of 2019. 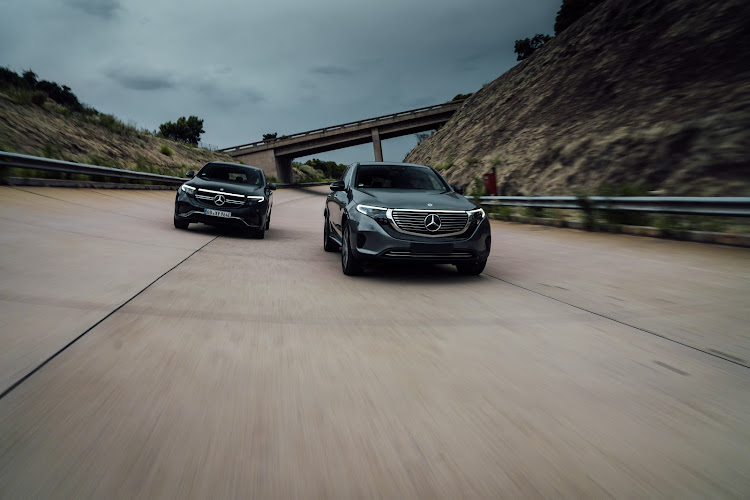 The Mercedes EQC will be in South Africa at the end of the year
Image: Supplied

The future is here. Granted, we might have made similar utterances when Nissan dropped its Leaf in 2013. It was the first fully electric vehicle to go on sale in SA. Or when BMW followed up with its egg-shaped i3 the following year.

Same hymn after reporting on the Audi E-Tron after a test drive in Abu Dhabi towards the end of 2018. But now we can confirm that the future really is here. Because in the space of a mere week, two more car makers have plugged into the local grid: Jaguar and Mercedes-Benz —though in the case of the latter it seems to be a cheeky case of ambush marketing.

While the official I-Pace launch was scheduled in advance, the three-pointed star brand sent a last-minute invitation to pore over the EQC as it underwent conclusive stages-of-developmental testing. Since colleague Gugu Masuku already committed to sticking his finger in the charging socket of the British feline, yours truly found himself sitting in the passenger seat of the competitor from Stuttgart which will spearhead its foray into the electric arena.

How can Merc be so smug about bringing this tardiness to the party? Ask and the response is: "Finally, electric now has a Mercedes." This was an exercise of observation, rather than an outright, hands-on experience — the engineers were in the process of fine-tuning at Gerotek testing facility in Tshwane. We also rode shotgun for a stint around the nearby roads, which included a stop at one of those anachronistic establishments we know as a fuel-filling station.

Visually, the EQC carries over most of the GLC-Class aesthetic, albeit with a sprinkling of cues denoting its status as a defector from internal combustion. Note the distinctive grille, rear lights spanning the tailgate and aerodynamically optimised wheel designs. Same goes for the cabin: if you are au fait with the contemporary Mercedes-Benz line-up, the EQC is not going to intimidate. The layout, switchgear and functionality are familiar, but once again with a slight twist in design and embellishment. Like the finish of the air-conditioning vents, in rose gold. Or the cheerful blue upholstery lining the uppers of the doors.

The EQC certainly seems as brisk as its 5.1-second sprint time promises on paper. Viewed from the outside, the spectacle is both dramatic and unremarkable. Dramatic in the comical way the 2.425kg sport-utility vehicle lunges towards the horizon. And unremarkable in that someone hit the mute button — it will take time to grow accustomed to the silence of electric mobility.

The EQC serves up a total system output of 300kW and 765Nm. Its pair of asynchronous motors (they operate independently of each other) are at the front and rear axle, thus offering all-wheel drive. It would be sheer denial to ignore the infrastructure challenges to electric mobility in SA. But the push from brands such as Nissan, BMW, Jaguar and Mercedes-Benz to keep the momentum up indicates the movement in SA is no flash in the pan. Expect the EQC to launch here in the fourth quarter of 2019.