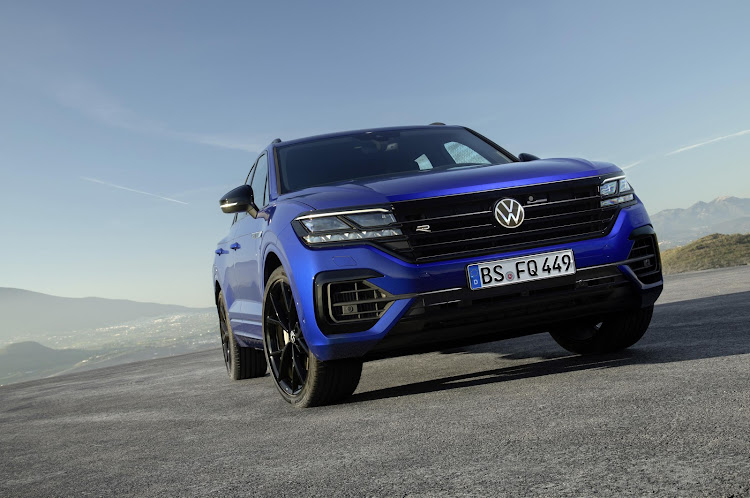 The Touareg R takes its place as the high-performance flagship of VW's SUV range.
Image: Supplied

A new plug-in hybrid (PHEV) powertrain and a Porsche-sourced 3.0-litre, turbo V6 petrol engine have been stuffed inside Volkswagen’s flagship SUV to create the Touareg R.

Due on sale in Europe midyear and set to debut at next month’s Geneva Motor Show, the Touareg R will thump out 340kW of power and can be driven as a pure electric car at up to 140km/h.

It’s essentially the same powertrain Porsche runs in the Cayenne E-Hybrid PHEV, with a combination of a 250kW petrol engine and a 100kW electric motor.

Its lithium-ion battery sits beneath the luggage floor and carries 14.1kWh of energy, delivering a heavy SUV that is capable of 44km of pure electric-car running.

On the flipside of its performance curve, it’s good for 700Nm of torque, enough to tow up to 3.5 tonne, and is the first plug-in hybrid SUV to come with trailer-assist technology for semi-automated reversing, even in pure electric mode.

Its combination of power and torque are enough to hurl it to 100km/h in less than five seconds.

While Volkswagen hasn’t quoted any consumption figures for the Touareg R, the same powertrain in the Cayenne version manages 3.2 litres/100km.

The all-wheel drive Touareg R, which shares its basic chassis architecture with stablemates like the Cayenne, the Audi Q7 and Q8, the Lamborghini Urus and the Bentley Bentayga, marks the first time a hybrid has powered the R version of a Volkswagen model.

With all of its torque delivered by its eight-speed automatic transmission, the Touareg R always starts off in electric mode, switching on the petrol motor beyond 140km/h, on a kickdown system or when the driver chooses its Sports performance mode.

The SUV’s navigation system will also read the road ahead through the navigation software and traffic information to eke out its electric performance.

It’s also the first Volkswagen to offer assisted driving features at up to 250km/h, a development that will help almost nobody outside Germany.

Riding on 20-inch wheels and tyres (with optional 22-inch rubber), it leapfrogs the Touareg V8 TDI as the badge’s flagship. It forgoes the Race mode on Golf Rs and Volkswagen claims it’s not necessary. It retains the Torsen all-wheel drive set-up, with up to 80% of the drive sent to the rear end or 70% to the front.

While it retains the air suspension systems of the top-end Touaregs, there is a shortcoming. It won’t have the active anti-roll bars or the optional four-wheel steering systems that are optional on other Touaregs, largely because there were packaging issues with the 48-volt battery system needed to run them. That space had already been taken by the hybrid system’s battery.

https://www.youtube.com/watch?v=tNIA_AAUXN4 Come and ride shotgun with Marius Roberts as he test drives the all-new Volkswagen Touareg.
Motoring
3 years ago