Volkswagen creates an electrifying hippie bus for a new era 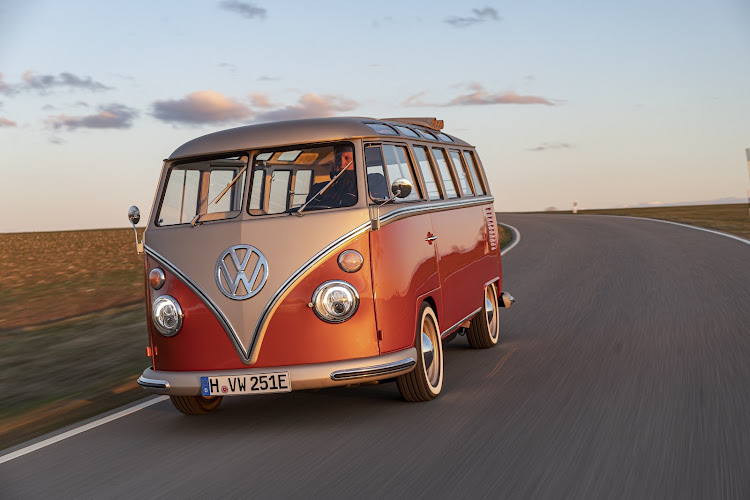 Restomods are classic cars that are updated with modern mechanicals and features, as a counterpoint to the vogue of keeping old cars as original as possible.

Volkswagen Commercial Vehicles has introduced what could be a very appealing restomod by converting a first-generation T1 kombi (known in Germany as the Bulli) with today’s technology, which includes running on battery power.

It’s taken an original 1966 split-window hippie bus and whipped out its wheezer of a 32kW petrol engine, replacing it with a much gutsier and cleaner 61kW electric motor.

With a maximum torque of 212Nm versus the original’s 102Nm, the electric version is able to cruise up hills without attracting dead flies on the rear windscreen like its progenitor did, and top speed has increased from 105km/h to a much more useful 130km/h.

This particular example is a rare T1 Samba Bus which had additional windows in the roof.

Called the e-BULLI, it’s not just a one-off nod to the flower power generation, a misty-eyed look at what a silent and nonpolluting bus might have been like back in the days of Woodstock.

It’s a vehicle that will be available to buy from VW partner eClassics in Germany, which plans to offer T1 conversions and T1 complete vehicles in the style of the new e-BULLI.

It’s the same company that last year unveiled an original VW Beetle that had been turned into an electric vehicle. 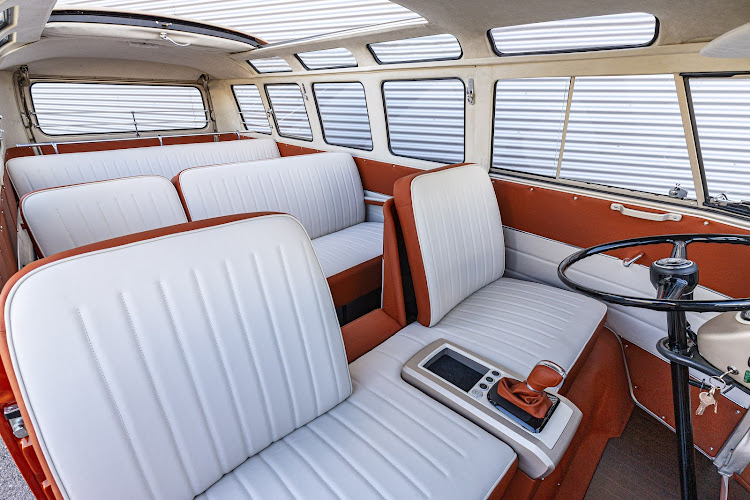 A complete interior revamp with a 60s-style vibe for the 53 year old bus. Picture: SUPPLIED

Like the original Bus, drive is to the rear wheels. Power transmission in the electric kombi is by means of a one-speed gearbox with a traditional-looking gear lever with P,R, N, D, B selector settings. In position B the driver can vary the degree of brake energy recuperation.

A 45kWh lithium-ion battery supplies the electric motor with power. The high-voltage battery is housed centrally in the vehicle floor to lower the centre of gravity and improve the driving characteristics.

It can be charged to 80% power in just 40 minutes at fast-charging points, and the claimed range on a full battery is more than 200km.

VW extensively modified the eight-seat interior with a stylish and avant-garde design that’s a nod to 60s-style colour schemes with "Saint Tropez" and "Saffrano Orange".

The new speedometer is based on the original’s but has an integrated digital display creating a link to the modern era. You can listen to the Beach Boys on the retro-style radio equipped with cutting edge technology such as Bluetooth and USB connections for smartphones.

Modernised retro is the exterior theme too with the iconically-styled chromed round headlamps equipped with LED lamps and daytime running lights. The two-tone paintwork blends "Energetic Orange Metallic" and "Golden Sand Metallic Matte".

Want one? Prices start from R1.2m, and the company also has conversions for the T2 and T3 generations.

More information is available at www.e-classics.eu.

Suzuki South Africa on Wednesday evening launched its all-new S-Presso, an entry-level budget car designed to take the fight to the likes of the ...
Motoring
2 years ago