The fully electric BMW iX3 is coming to SA in 2021 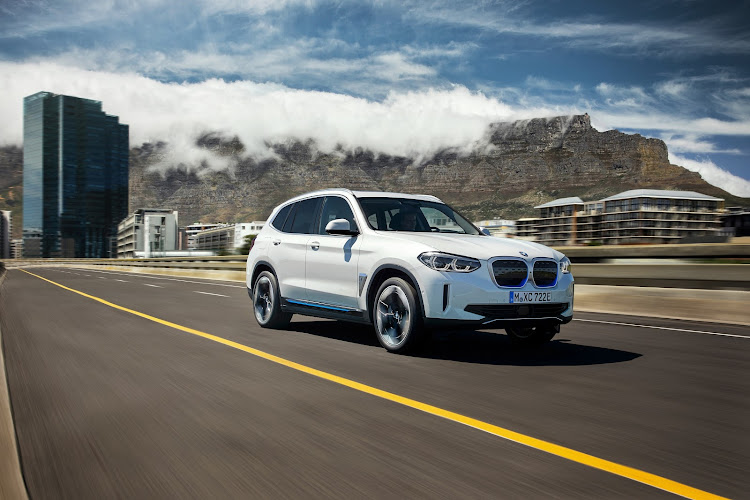 The fully electric BMW iX3 will arrive in SA during the last quarter of 2021. Picture: SUPPLIED

The BMW iX3 is the brand’s fully electric derivative of the compact SUV that was first unveiled in 2003. Now in its third generation, the X3 range is about to launch the company’s next chapter in sustainable mobility under the umbrella of “Power of Choice”, which will see the German marque offer the X3 in petrol, diesel, plug-in hybrid and now fully electric guise.

The iX3 fuses traditional styling cues of the X3 range with details that characterise BMW i cars, with a premium interior that has space for four to five passengers with cargo load capacity of 510l with the seats up and 1,560l when folded.

The meat of the new BMW iX3 is the fifth-generation BMW eDrive technology with power density that has increased by 30%.

The iX3 80kWh battery enables a driving range of up to 460km and the vehicle can be charged from 0-80% in 34 minutes using a DC fast-charger. It can be juiced with 100km of range in 10 minutes if you are in a hurry.

It gets varying degrees of energy recuperation levels and protocols, using either one-pedal action or a coasting energy saver. Adaptive suspension is standard fitment.

The company says a newly developed soundscape for its electrically powered BMW models makes its debut in the BMW iX3. This is a selection of sounds emitted by the cars when starting or deactivating the car.

The BMW charging card provides access to more than 450,000 public charging points worldwide and will allow for charging through multiple socket types and Wallboxes.

The new iX3 will be on sale in SA in the fourth quarter of 2021 and more information will be communicated closer to the time.

The Porsche Taycan is one of the most significant new models to be launched in the country this year.
Motoring
1 year ago

The Italian parliament gave the green light on Friday to a package of incentives to encourage sales of state-of-the-art combustion engine cars as ...
Motoring
1 year ago