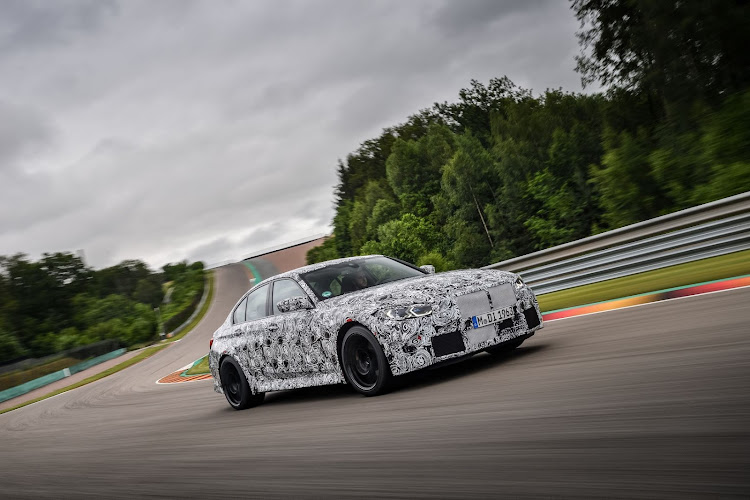 A new and heavily camouflaged BMW M3 Sedan in action around the Sachsenring.
Image: Supplied

Variety is the spice of life, which is why BMW has been putting its new M3 Sedan and M4 Coupé models to the test not just at the legendary Nürburgring Nordschleife but also the Sachsenring, located in Hohenstein-Ernstthal near Chemnitz in Saxony, Germany.

Used by the German Touring Car Masters (DTM) racing series, this 3,670m circuit offers up a challenging mix of hairpin bends, long straights and high-speed sweeps - just what you need for fine-tuning the handling dynamics of high-performance vehicles such as these.

Set to premiere mid-September, the new M3 Sedan and M4 Coupé models are powered by newly developed straight six-cylinder engines that promise more performance than ever before. Standard derivatives will produce 353kW and come mated to a six-speed manual gearbox. Meanwhile the Competition model makes 375kW and is available exclusively with an eight-speed M Steptronic transmission with Drivelogic.

Maximum torque is pegged at 650Nm. While power is delivered exclusively to the rear wheels, BMW's latest M xDrive all-wheel-drive system will be made available at a later date. We think this is most sensible.

Racetracks aside, BMW has also been fettling the suspension and braking technology of these two fiery newcomers on public roads at the BMW Group testing centres in Miramas, France, and the Swedish town of Arjeplog - so expect them to be pleasingly well-rounded and livable when they do hit the streets later this year.

Design is not about pleasing everybody, it’s about standing out, says Domagoj Dukec
Motoring
10 months ago

The number 2 has served as something of an experimental digit for BMW.
Motoring
10 months ago