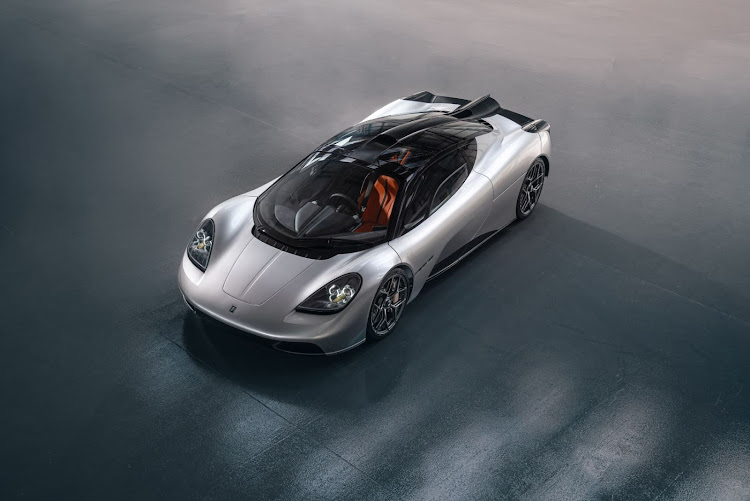 Gordon Murray Automotive (GMA) on Tuesday unveiled to the world its insanely lightweight T.50 supercar. Engineered to succeed the McLaren F1 and deliver an involved and puristic driving experience, here are five things you need to know about it.

1: It's one of the lightest supercars on the planet

Weight is a designer's enemy. This is why GMA went to extreme lengths to make the T.50 as light as possible. Its chassis and body has been constructed entirely from high-grade carbon fibre, which provides inherent stiffness and torsional rigidity. The car's body (including the carbon monocoque and all body panels) tips the scales at less than 150kg.

“With the design of our T.50 supercar, we are taking the same focused approach that was applied to the design of the McLaren F1, says Professor Gordon Murray CBE.

“Thanks to modern materials and 30 years of development, we have been able to deliver a far better all-round car in the T.50, while setting its weight at just 986kg, a full 150kg lighter than the F1.”

That 986kg (that's wet weight not dry weight) is an insanely low number in 2020 and GMA did everything it could to stay below the 1,000kg mark. This included fashioning every last nut, bolt and washer from gravity-cheating titanium. 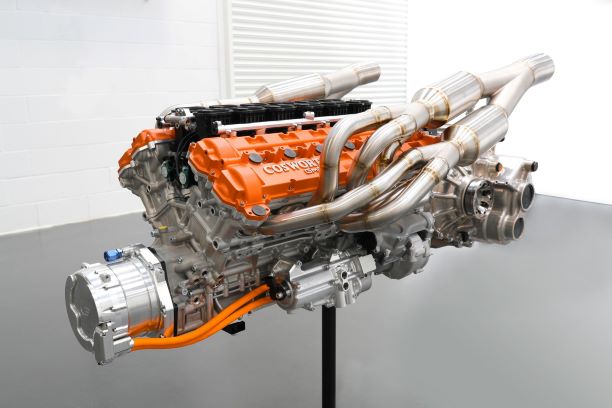 2: There's not a turbo in sight

Designed from the ground up to be a purist's supercar, the T.50 has shunned the current trend of forced-induction power plants.

“To be truly remarkable, an engine needs to have the right characteristics: highly-responsive, an amazing sound, engaging torque delivery, free-revving, and it has to be naturally aspirated,” explains Murray. “For all those reasons, the engine in the T.50 was never going to be anything other than a V12.”

Consequently the T.50 sports a radical 3.9-litre engine that delivers 487kW at 11,500rpm (23kW more than what the McLaren F1 produced), on its way to a 12,100rpm redline. The Cosworth GMA V12 not only promises screaming high-end power, it is also extremely tractable for everyday driving. The maximum torque figure of 467Nm is produced at 9,000rpm, while the pick-up is a record-breaking 28,400 revs per second.

The T.50 has the highest power density (122kW-per-litre) of any road-going V12. It is also the lightest ever made thanks to a combination of exceptional design and lightweight materials (aluminium, steel and titanium) resulting in a total engine weight of just 178kg.

The engine map has two states of tune, one “Power Mode” for maximum revs and the full 487kW, and a “GT Mode” that limits revs to 9,500rpm and power to 441kW – ideal for urban commutes or relaxed touring.

GMA has not provided any performance figures - it sees them as irrelevant.

Meanwhile cog-swapping duties are taken care of by a totally bespoke transmission built specially for GMA by Xtrac. The British firm created a strong but extremely light aluminium housing cast at just 2.4mm thickness. This results in a gearbox that not only meets strict packaging requirements within the car, but also weighs in at just 80.5kg.

The transmission features five close ratios, geared for acceleration, with a longer sixth ratio for cruising. Reverse is selected having first flicked the red “lockout” switch set next to the titanium gear lever.

“The car’s six-speed H-pattern manual transmission is a tribute to Xtrac’s skill, continuing our focus on driver engagement,” says Murray.

“The gear change motion and weighting was honed meticulously until we achieved the perfect end result. The outcome is a narrow cross gate and a short throw. It delivers slick, crisp gear changes – truly a joy for the driving enthusiast.” 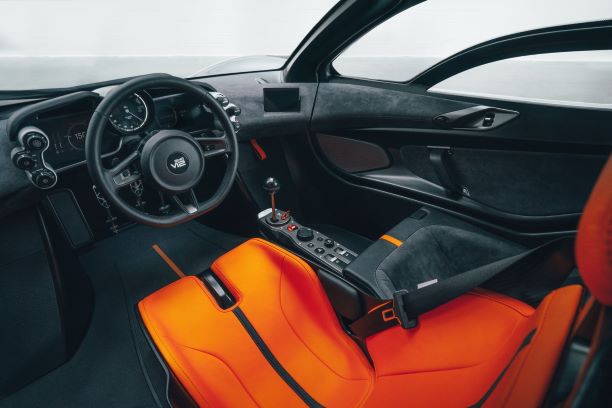 The cabin offers seating for three and all the amenities you'd expect of a modern vehicle in 2020.
Image: Supplied

3: It's built to be everyday usable

According to GMA the T.50 is a supercar that can be used on a daily basis.

Like the McLaren F1 it offers staggered seating for three people (the driver sits in the middle of the car's cockpit and passengers on either side) as well as a surprising amount of luggage space. You'll also find creature comforts such as climate control and a simple infotainment system that piggybacks off Android Auto or Apple CarPlay.

There are no touchscreens as Murray finds them distracting and, in the case of supercars, downright dangerous. The bespoke 10-speaker 700-watt audio system was designed by Arcam and weighs just 3.9kg.

“Comfortable, refined, spacious and easy to drive – not a typical description for a supercar with the capabilities, power or driver focus of the T.50,” states Murray. “I’ve designed this car to be used every day, with almost 300 litres of luggage and storage space, a premium stereo, and excellent air conditioning. From its exceptional visibility and compact footprint to ease of ingress and egress, the T.50 rewrites the supercar rule book for usability.”

Unlike other supercars the T.50 is surprisingly compact and has a footprint equal to that of an average C-segment hatchback. This makes it easy to park and place on narrow roads or in urban environments. To help it clear speed bumps and other items of troublesome road furniture the T.50 sports a front ride height of 120mm. The rear is pegged at 140mm. 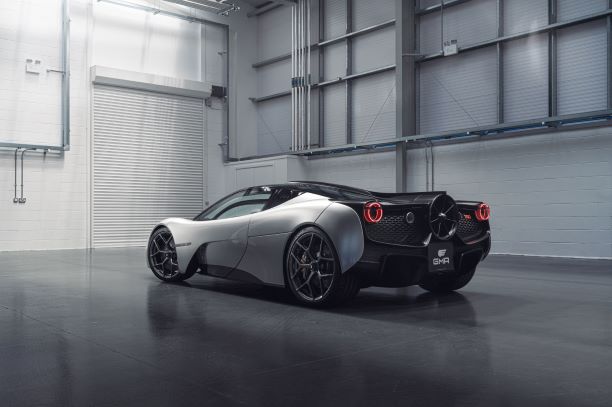 4: The most advanced aerodynamics fitted to a road-car

Through the application of two automatic and four driver-selected aero modes, the T.50 is capable of increasing downforce by 50%; reducing drag by 12.5%; adding around 40kW to the car’s output in combination with ram-air induction; and cutting braking distance by 10m from 240km/h.

The fan and its associated ducting system improve on conventional ground-effect systems by actively managing both underbody and overbody airflow. This boundary layer control ensures the most effective interaction of airflow on top of, and below the car, balancing drag and downforce at all speeds.

This same fan-assisted aerodynamic enhancement was first used for the road on Murray’s F1 supercar. Few realise that two fans had been employed to pull air from under the car as these, far smaller, fans were hidden beneath each of the F1’s rear haunches.

The underbody airflow system not only enhances performance, but also allows purity of design for the car’s upper surfaces. Air flows over the top of the car undisturbed by unsightly vents, ducts, or flaps. The fan interacts with a pair of active spoilers at the rear, which can contribute to downforce or reduce drag, as required.

The fan is driven by a lightweight 48-volt motor, spinning at up to 7,000rpm. The unit’s design and underbody ducting does away with the need for a “skirt” – like that used by Murray’s Formula One BT46B Fan Car. Vertical inlet ducts fitted with filters ensure no road debris can pass through the fan. 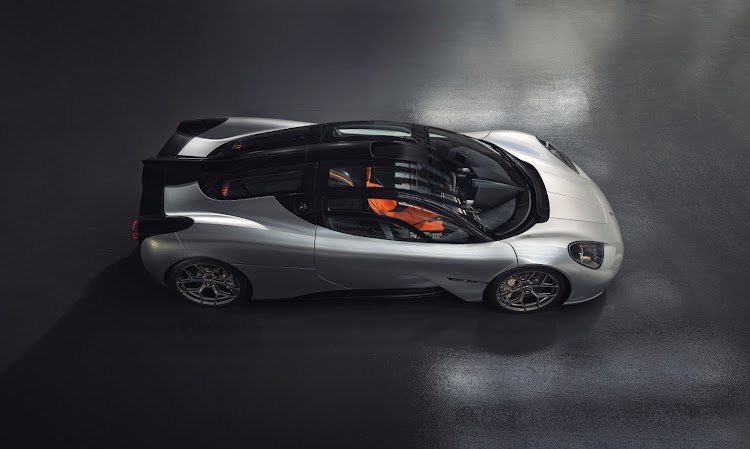 With its R53m price tag the GMA T.50 will remain the exclusive reserve of only the world's most wealthy driving enthusiasts.
Image: Supplied

5: It's ultra exclusive and eye-wateringly expensive

GMA has confirmed that it will built 125 examples of the T.50. Of these 100 will be road-going variants with the other 25 being reserved for track use only. Most have been spoken for but there are still a few for sale if you can afford the staggering £2.36m (roughly R53,499,831 before taxes) price tag.

“Just 100 customers will share my vision, a car created to improve on the F1 formula in every conceivable way,” concludes Murray. “With 30 years of technological and systems advancement, now, the time is right to design the greatest analogue driver’s car. I believe no other company could deliver what we will bring to market in 2022, producing this British supercar will be my proudest moment.”

Variety is the spice of life, which is why BMW has been putting its new M3 Sedan and M4 Coupé models to the test at the Sachsenring in Saxony, ...
Motoring
1 year ago

A four-cylinder petrol engine is spliced with a turbo, supercharger and 48 volt alternator
Motoring
1 year ago