Golf-based T-Roc follows the smaller T-Cross, which has become a popular seller 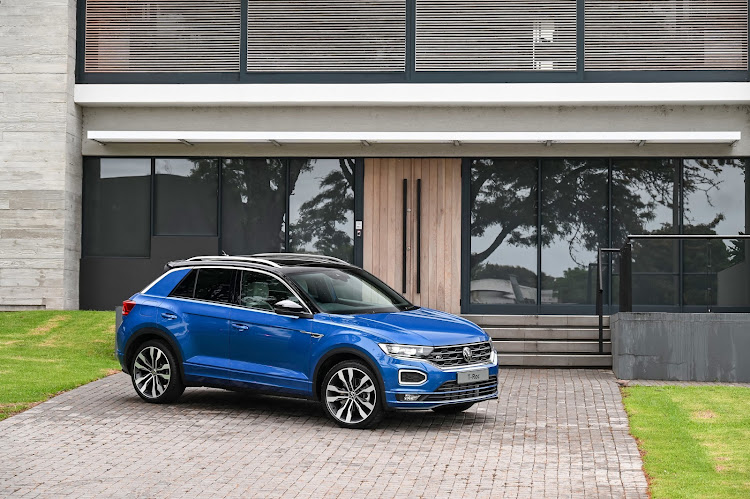 The new VW T-Roc slots in between the entry-level T-Cross and  mid-tier Tiguan. Picture: SUPPLIED

A brand formerly known mostly for hatchbacks, Volkswagen has been steadily transforming into an SUV and crossover specialist with vehicles such as the Touareg, Tiguan and T-Cross.

This week saw the expansion of its high-rider portfolio with the local introduction of the new T-Roc, a shapely crossover built on the Golf platform that’s marginally larger than the popular-selling T-Cross.

Judged by its coupe-crossover silhouette it has very few rivals but it brings style and a go-faster outlook to a more mainstream, sub-R600k segment.

It mimics its Audi Q2 group cousin’s styling with thick C-pillars and a 26 colour options that include two-tone schemes through contrasting roof paint, A-pillars and exterior mirror housings.

It’s priced competitively against the Audi but the associated numbers tell a different story.

The T-Roc is 43mm longer and 65mm higher than the Q2. The VW also yields 240l more cargo space with the rear seats folded yet the Audi trumps it with an 11cm longer wheelbase — that 11cm equating to more room and comfort for passengers.

Specification is generous and apart from enabling customers to personalise the T-Roc interior with bright colours, the VW comes standard with Composition Media radio and App-Connect running through an 20.3cm colour touchscreen, a digital instrumentation panel, a pair of USB ports and optional inductive smartphone charging. 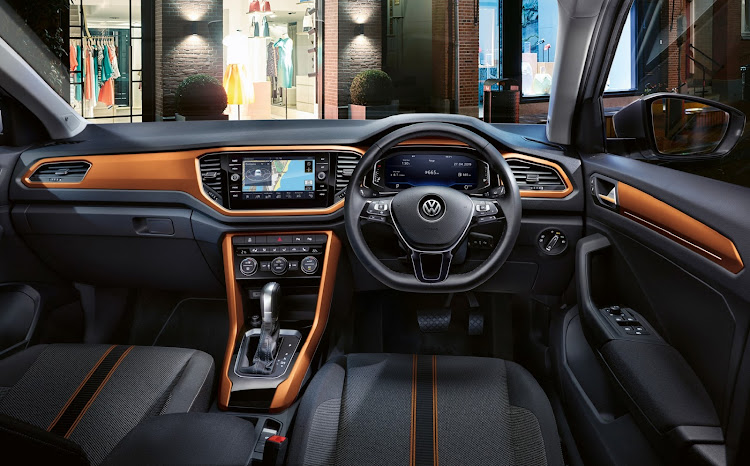 The T-Roc interior is spacious, digital and can be personalised to be very colourful. Picture: SUPPLIED

Apart from expected regulars such as air conditioning and voice control, more options to be added include a panoramic sunroof, electronic trailer hitch, navigation system and the Beats sound system.

For its sporting intentions the range-topping T-Roc comes with a 140kW and 320Nm 2.0 TSI petrol turbo engine linked to a seven-speed DSG and 4Motion all-wheel drive. Performance is rated at 7.2 secs from 0-100km and a top speed of 216km/h. Fuel consumption is claimed at 8.3l/100km provided it doesn’t bait you into a more vigorous driving style.

In entry-level 1.4 TSI form it gets 110kW and 250Nm channelled through an eight-speed Tiptronic transmission driving the front wheels. It dashes from 0–100km/h in 8.4 sec, achieves a top speed of 205km/h and has fuel consumption average of 6.9l/100km.

The first drive revealed a fair execution of an exciting little coupe-crossover for the masses. It’s also sumptuously comfortable, gripping and zippy on the roads while it's quite a looker especially in R-Line trim with its standard 19-inch Suzuka alloy wheels.

The Volkswagen T-Roc comes standard with a three-year/120,000km warranty and a five-year/90,000km Volkswagen Service Plan.

The BMW G 310 R is an excellent starter motorcycle that's light, easy to ride and great to look at. We tested it back in 2018 and were really ...
Motoring
5 months ago
Next Article