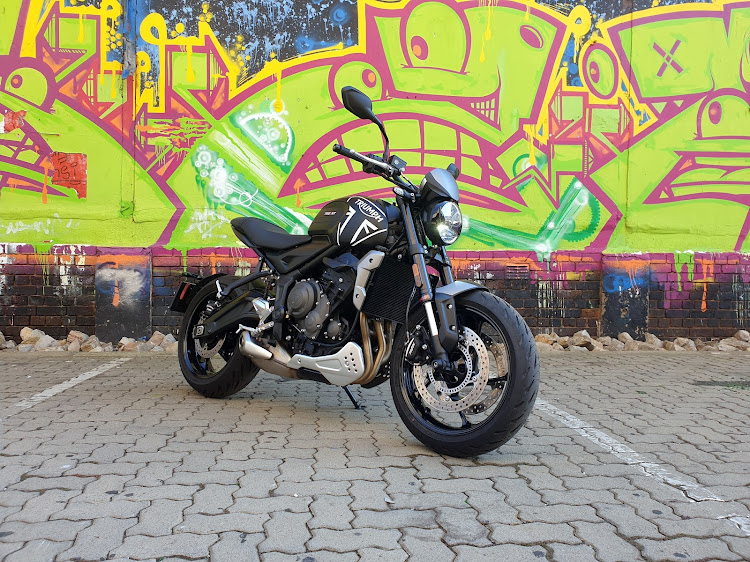 With edgy looks, a peppy triple-cylinder engine and an appealing price tag, the 660 Trident has arrived in SA as Triumph’s new entry-level machine.

Call it a naked street bike or a retro-cool commuter, the Trident occupies something of a middle ground much like its rivals, the Yamaha MT-07 and Kawasaki Z650.

This middleweight machine may appeal to newer riders as a stepping stone into the big-bike league, or to former superbikers who have outgrown the need to ride at 300km/h.

Either way, the new Trident 660 is a feel-good bike that reminds a lot of Triumph’s Street Triple 675 in its easy rideability and agile nature, even though it’s not as punchy.

The three-cylinder 660cc engine musters 60kW at 10,250rpm and 64Nm of torque at 6,250rpm, which serves up pace that falls into the not-quite-exciting category but is satisfyingly brisk and has decent midrange torque.

Like the Street Triple, the Trident is bereft of any fairing or wind protection, making it more of a short-hop commuter and breakfast-run machine than long-distance tourer. It has the styling swagger of a junior streetfighter. The lack of plastic covers puts all the mechanical components on display, and these are stylishly executed with the smart-looking finishes of modern Triumph repute.

At the Trident’s launch, Bruce Allen, CEO of Triumph Motorcycles SA, guided us on a tour of Jozi’s urban environs including the trendy-gritty Maboneng district with its cafes and attractive street art. The Trident is an accessible, easy-riding machine. It zipped through those busy urban streets feeling pleasantly nimble and wieldy, with its compact size, light clutch and smooth gearshifts contributing to its stress-free riding nature. 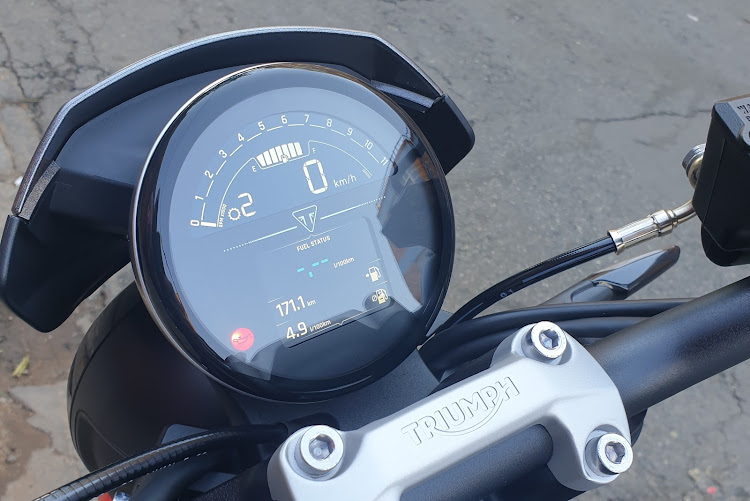 The ride is a bit choppy on bumpy roads without being a bucking bronco, and overall comfort is good. The upright seating position promises wrist-friendly riding comfort over extended distances.

The Trident is compact without feeling cramped, with a low 805mm seat height that allows shorter riders to straddle it without having to stand on tippy toes, while larger riders won’t feel like the Hulk perched on a Shetland pony either.

This entry-level Triumph has enough puff for the open road, and once we left Jozi’s bustling streets and hit the freeway it eagerly zipped through gaps and briskly accelerated its way out of potential trouble. With its flat torque curve it’s not an engine that calls for aggressive throttle inputs, but revving it higher does elicit a sweeter sound from those three cylinders.

Minimalist it may look, but the Trident has all the requisite modern safety features including ABS brakes, traction control, and switchable Road and Rain modes. The digital instrument panel is a colour TFT screen and the front and rear lights are LEDs, with the darkened headlamp conforming to today’s black-is-the-new-black zeitgeist.

All those features come standard for the R150,000 retail price, but there are 45 accessories to personalise the Trident 660, including various cosmetic tweaks, a fly screen, heated grips, a USB charging port and a quickshifter, to name just a few. The bike comes with Triumph’s two-year unlimited mileage warranty.

The future of motoring is electric, we are constantly reminded, and as more battery-powered cars hit the road, the trend is extending into the ...
Motoring
1 year ago