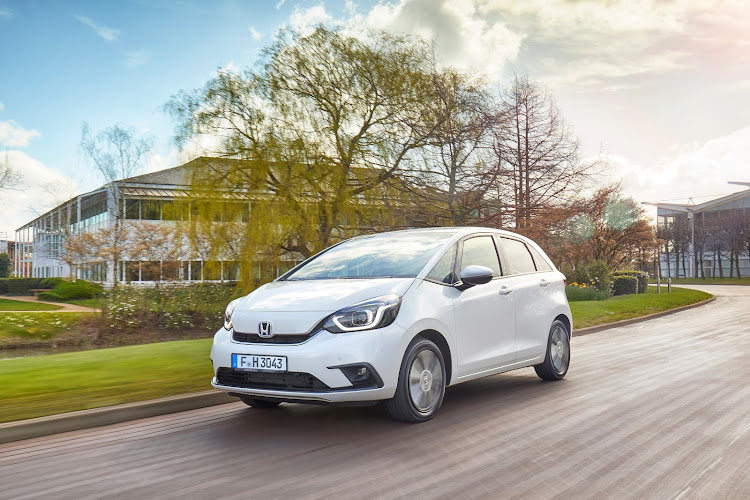 Honda’s Jazz has been with us since 2003, its main selling point being its comparatively roomy cabin and “magic” folding seats that have made it one of the market’s most practical B-segment hatchbacks.

Along with being able to fold down the rear backrests like other hatches, the Jazz’s party trick is the ability for the rear seat cushions to be flipped up like cinema seats to create a handy space behind the front seats for tall objects like pot plants or small bicycles. This ingenious utility helped it find more than five million buyers around the world.

With the launch of the new fourth-generation version in SA next month, the car is about to undergo a major revamp, introduce a new petrol-electric hybrid model, and undergo a name change. Replacing the third-generation Jazz that was launched here in 2015 and facelifted in 2018, it will be called the Fit, the same moniker it carries in its Japanese home market.

Asked for the reason behind the name change, a Honda spokesperson said: “The rebranding of this model for the local market is representation of a new generation of cars for Honda Motor Southern Africa, keenly focused on reasserting Honda’s position as a brand that is synonymous with outstanding quality, durability and brand new technology.”

The car maintains its typical one-box or monospace design with huge windows, plus its trademark versatility with magic seats and an impressive luggage capacity of 1,203l with the rear seats folded down.

A major styling overhaul sees it ditching the third-generation’s sporty Civic-type front end for a meeker shape with doe-eyed headlamps and an all-round cleaner design.

It will be available in petrol and e:HEV petrol-electric hybrid guises, in front wheel drive and a choice of manual and automatic gearboxes. Details of the petrol version aren’t yet revealed but the e:HEV hybrid combines a 1.5l  iVtec four-cylinder 72kW petrol engine with two electric motors. One motor acts as a generator to recharge the lithium-ion battery and the other as an electric propulsion motor. Total system output is 80kW and 253Nm, and the e:HEV runs on the sniff of an oil rag with Honda claiming a combined cycle of just 4.5l/100km (WLTP).

The new Honda Fit comes complete with an upgraded suite of advanced safety features and driver aids as standard.

More information will be disclosed at the Fit’s launch in late June, including how its prices compare with rivals such as Volkswagen Polo, Ford Fiesta, Suzuki Swift, Hyundai i20 and Toyota Starlet.

Fond of the Audi Q2? Nope, neither are we truth be told. Yet this hasn't dissuaded the Four Rings from giving its littlest and perhaps most ...
Motoring
7 months ago

The revitalised Range Rover Velar line-up has rolled into Mzansi, bringing with it an all-new plug-in hybrid model. Designed to offer the best of ...
Motoring
7 months ago

Five things to know about the all-new 2021 Hyundai i20

The third-generation Hyundai i20 has been launched in SA. With its attractive exterior styling, upgraded engine and enhanced interior amenities, this ...
Motoring
7 months ago