Five things to know about the new BMW 2 Series Coupé 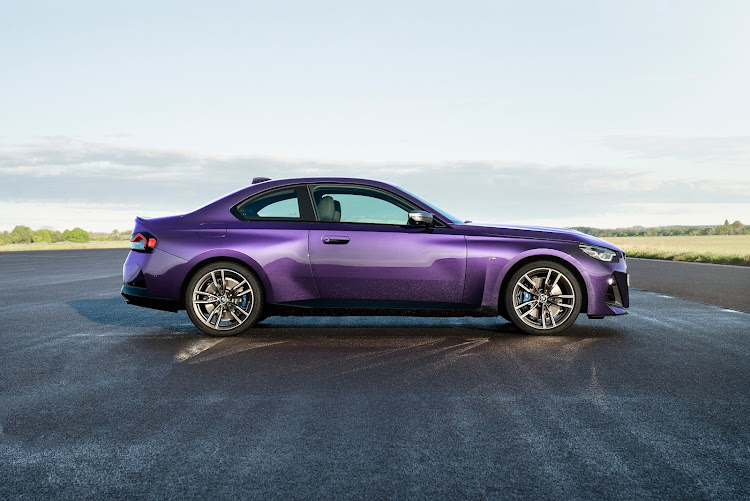 The new BMW 2 Series Coupé will arrive in SA during the first quarter of 2022.
Image: Supplied

The all-new BMW 2 Series Coupé has been unveiled to the world. A modern successor to the much-lauded 2002 of the late 1960s, this compact rear wheel-drive coupé ushers in a welcome return to tradition with proper old-school driving thrills and aggressive good looks. Scheduled to hit the market in 2022, here are five things you need to know about it. 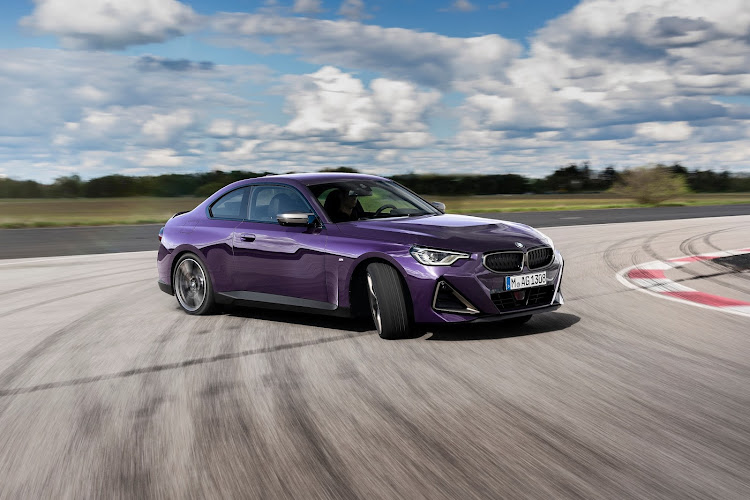 1: It's larger than its predecessor

Riding atop BMW's rear-driven CLAR platform, the new second-generation BMW 2 Series Coupé is significantly bigger than the model it replaces. Whip out your tape measure and you will discover that it's 105mm longer and 64mm wider. The wheelbase has been extended by 51mm while the front track has been widened by 54mm and the rear by 31mm. Meanwhile, the roofline has been lowered by 28mm for a slightly lower centre of gravity. Lateral torsional rigidity is up by 12% and 50:50 weight distribution is ensured thanks to the fitment of a lightweight aluminium bonnet and aluminium front wings.

In terms of exterior styling, the new 2 Series Coupé adopts an evolutionary approach that builds on the dapper aesthetics of its predecessor. Now while we're not crazy about the mishmash of shapes present in the lower half of the front bumper, we do like the newly designed kidney grille. The latter features active air flaps to increase aerodynamic efficiency and reduce drag at higher speeds. Special mention must also go to the new LED headlamps that feature individual circular elements – a hat-tip to the 02 models of old. 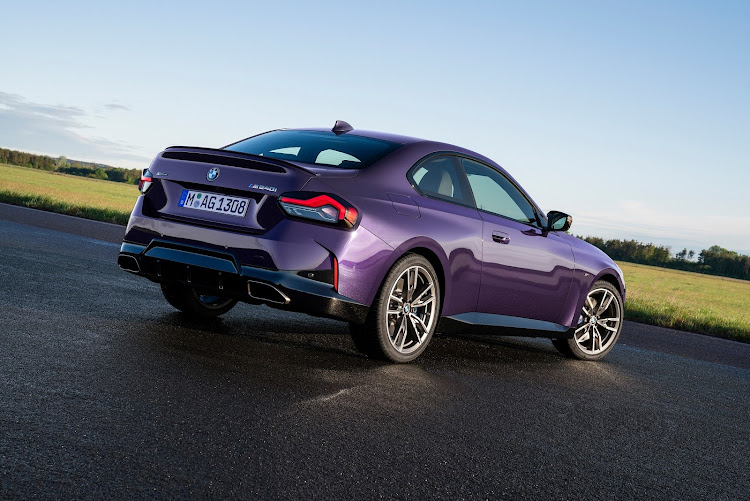 When the new 2 Series Coupé arrives in SA customers will be able to pick from one of three models. Kicking things off is the 220i Coupé that sports a 2.0-litre four-cylinder turbocharged petrol engine good for 135kW and 300Nm. Expect 0-100km/h in 7.5 seconds and a VO2 max of 236km/h. Next up is the 220d Coupé that comes bolted to a 2.0-litre four-cylinder turbodiesel developing 140kW and 400Nm. BMW claims that it will sprint to 100km/h in 7 seconds and reach a maximum speed of 237km/h. Aided by 48v mild hybrid technology, it can achieve miserly fuel consumption: 4.8l/100km on the combined cycle.

Those seeking more excitement can opt for the flagship M240i xDrive Coupé that packs a 3.0-litre six-cylinder turbocharged engine (the trusty B58) twisting out 285kW and 500Nm. Distributed to all four wheels via a rear-biased all wheel-drive system, these figures translate to a 0-100km/h time of 4.3 seconds and a limited top speed of 250km/h.

All three models are paired exclusively to an eight-speed Steptronic Sport transmission. 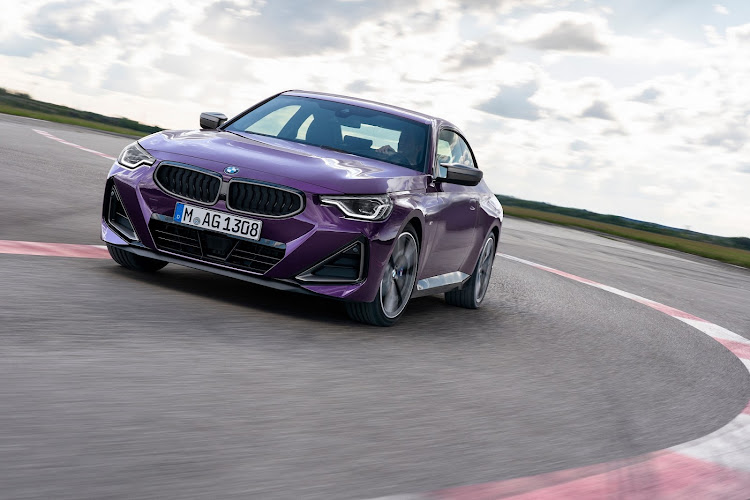 The M240i xDrive Coupé ups the ante with a model-specific version of the M Sport suspension, additional front axle struts, M Sport brakes and a mechanical rear M Sport limited-slip differential. The engineers also dialled in some extra negative camber and further widened the track: +9mm up front and +4mm at the rear. Here customers can also tick the box on Adaptive M suspension with electronically controlled dampers as well as a set of high performance tyres to shoe this flagship model's 19-inch M light-alloy wheels. 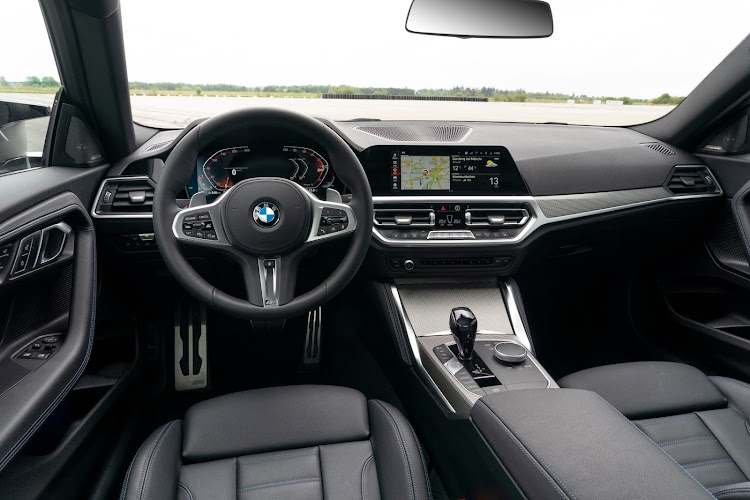 The interior is essentially the same as the one found in the current generation 3 Series.
Image: Supplied

The cabin of the new 2 Series Coupé is pretty much identical to the one used in the current 3 Series. Compared to the outgoing model this means a welcomed hike in overall quality, fit and finish. Sport seats and a sport multifunction steering wheel are both fitted as standard fare, as is three-zone automatic climate control and ambient lighting. You can also look forward to the BMW Live Cockpit Professional system that consists of a 10.25-inch touchscreen infotainment system and a 12.3-inch digital TFT instrument cluster. Options for the first time now include BMW Head-Up Display and BMW Drive Recorder. 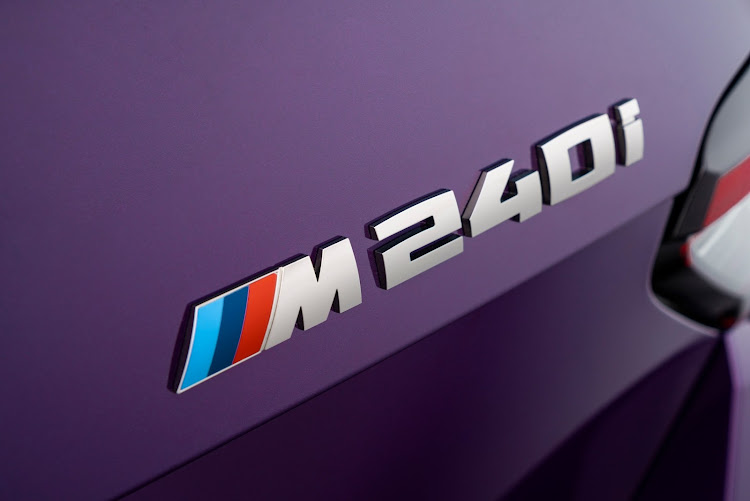 According to BMW the new 2 Series Coupé range will touch down in Mzansi during the first quarter of 2022. Final specs and pricing will be confirmed closer to that time.

Unveiling its last petrol car, Lotus sets off in pursuit of Porsche

Lotus unveiled its last ever petrol car, the Emira, on Tuesday, a milestone in the British sportscar brand's journey towards becoming an ...
Motoring
2 weeks ago

Last month Kia unveiled its new fifth-generation Sportage SUV. Now while the South Korean manufacturer told us all about this newcomer's styling and ...
Motoring
3 weeks ago

It is quite incredible to think the little Abarth 500 has been with us since 2008. Yep, this teeny Italian hot hatch has seen decades and counting
Motoring
3 weeks ago