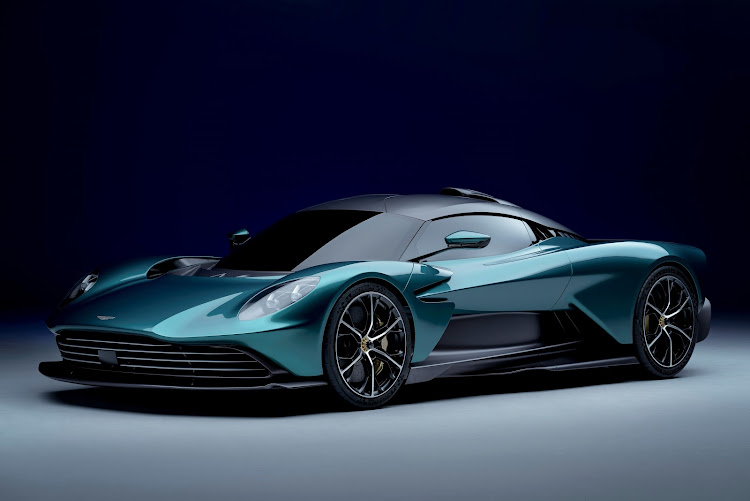 The high-performance British super car will compete with the likes of the Ferrari SF90 and McLaren Artura. Picture: SUPPLIED

Aston Martin has confirmed its imminent Valhalla mid-engined supercar will no longer use the Aston-developed twin-turbo V6 hybrid motor. It will now flex muscles using the 4.0l V8 from Mercedes-AMG, spliced with a 150kW/400V hybrid battery system of two e-motors mounted on the front and rear axles. The total system output is an astonishing 699kW and 1,000Nm.

The British supercar firm has access to Mercedes’ electric car technology after the German firm said it will increase its stake in the British firm from 2.6% to 20% by 2023.

In electric-only mode, the Valhalla’s battery power with plug-in-hybrid capability is directed exclusively to the front axle while selecting other modes the torque is split between the front and rear axles in varying percentages. In certain situations, 100% of battery power can be sent to the rear axle, supplementing the full force of the bellowing V8 that revs to 7,200rpm.

The car has an eight-speed dual-clutch transmission and features an e-reverse, meaning no conventional reverse gear. Instead the transmission latches onto the electric motors when backing-up.

The Valhalla’s built of lightweight carbon-fibre in pursuit of a dry weight of less than 1,550kg, along with the requisite dynamism and speed potency.

Unlike the Valkyrie that’s built with Le Mans racing blueprints, the smaller Valhalla is inspired by F1 cars and it gets similar style pushrod front suspension, along with adaptive dampers, a rear multilink design and a Track mode that adjusts the ride height and maximises downforce.

The 0-100km/h dash is rated at 2.5 seconds with a 330km/h top speed. Aston Martin is also targeting a record 6min 30sec blitz around the Nürburgring Nordschleife while the Valhalla will also be capable of a maximum 130km/h and 15km in pure electric drive mode. 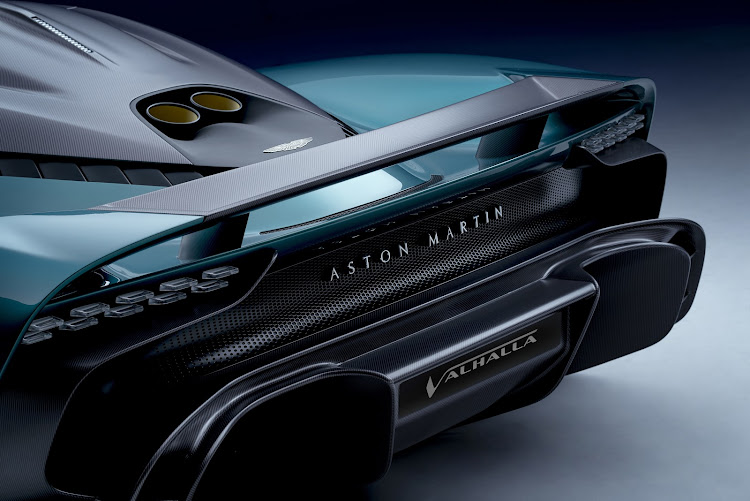 The sound of the high-revving V8 will exit through top-exit ports. Picture: SUPPLIED

The new Valhalla, which will be available in both left and right-hand drive markets, is a hybrid of a road and track car. For this the cockpit room is roomier than the larger but track-focused Valkyrie, and it features a central touchscreen display, Apple CarPlay and Android Auto, full LED matrix and adaptive headlights with high-beam assist, dual zone air conditioning, auto emergency braking, forward collision warning, active cruise control, blind spot monitoring and a rear view parking camera.

For the racing paddocks it gets adjustable pedals and steering column, seat bases that can be fixed to the chassis structure, and footwells raised for a low hip-to-heel seating position of a Formula One car.

Development of the Valhalla is assisted by Aston Martin’s Formula One drivers Sebastian Vettel, Lance Stroll and Nico Hulkenberg.

Prices and availability have yet to be confirmed.

Alfa Romeo on Monday confirmed that its stripped-down, track-focussed Giulia GTA and GTAm models will be coming to SA – albeit in very limited numbers
Motoring
10 months ago

Opel has unveiled its all-new sixth-generation Astra hatchback that will soon start rolling off the manufacturer's production facility in ...
Motoring
10 months ago