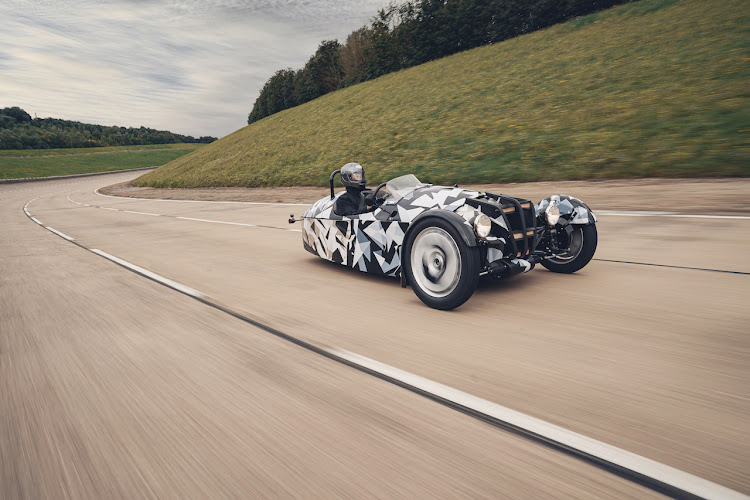 A photograph of the new Morgan three-wheeler, which is now undergoing development.
Image: Supplied

Eccentric British car maker Morgan confirmed on Wednesday that it is busy working on a replacement for its quirky three-wheeler that ceased production earlier this year.

Not much has been revealed about the new model, other than it will be powered by a Ford-sourced three-cylinder naturally aspirated engine. Just in case you've forgotten, its controversial predecessor used a 1973cc S&S overhead valve V-twin motor.

While a name is not confirmed for the new three-wheeled model, the UK-based company cites that it will be defined by an “all-new design, adventurous character, and significant engineering advancements”. Morgan says the vehicle will also take inspiration from the many owners of the outgoing model who have embraced adventure travel and touring. More creature comforts then? Maybe some modern tech? We look forward to finding out.

“We are thrilled to confirm plans for an all-new three-wheeler, a model that continues an incredible story dating back to 1909,” says Morgan's chairman and CEO, Simon Morris.

“The outgoing 3 Wheeler was adored by customers and enthusiasts alike, and will inspire this next generation. The upcoming model is an all-new ground-up design and the first whole vehicle programme to be completed under the stewardship of Investindustrial.

“Morgan’s team of engineers and designers have considered everything that the company has learnt from the decade of building and selling the previous model. We look forward to sharing more about this exciting new vehicle in due course,” Morris concludes.

In an unlikely crossover, Goku from "Dragon Ball" defeated the Flintstones in a recycled "crazy car" race in Peru on Monday
Motoring
3 weeks ago

Opel Rocks-e rocks onto the market, but won’t be rocking SA

Meet Opel’s smallest and cheapest car, the Rocks-e (pronounced “Roxy”). It’s an entry-level electric city car that can be driven in Opel’s home ...
Motoring
3 weeks ago