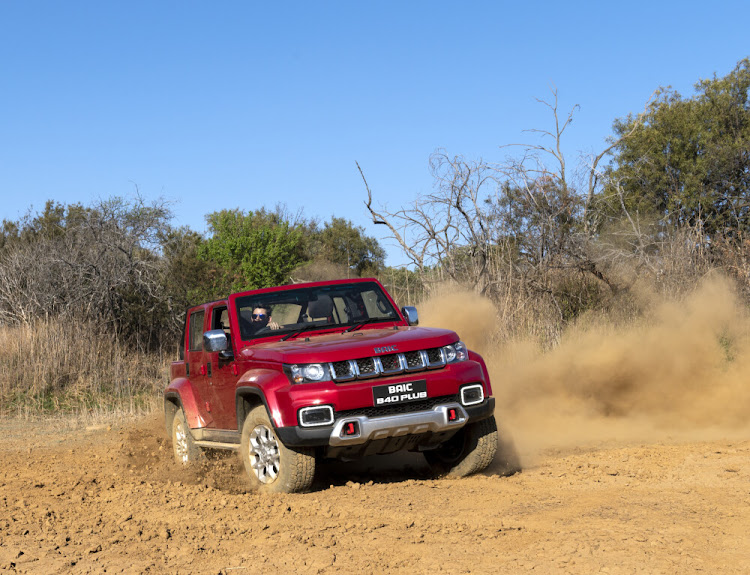 The new BAIC B40 Plus is now available in SA.
Image: Supplied

Chinese car maker BAIC this week launched its chiselled new 2021 B40 Plus range in SA.

With its roots in the military (the original B40 was designed for use in the Chinese army), this newcomer arrives at the trailhead with lots of bold, squared-off styling chops. Cynics would say that the B40 is simply an Eastern Xerox of the West's Jeep Wrangler and, well, they're probably not wrong. However, this is no bad thing as the latter is certainly not a bad looking vehicle — especially through the eyes of hardened off-road enthusiasts.

Standout exterior features of the BAIC include a five-slot grille design (apparently inspired by the Great Wall of China), lots of chrome and black accents and a set of daytime running lights. The front bumper also hides a pair of chunky red tow hooks.

While the B40 Plus might look overtly utilitarian its interior is anything but. Climb inside the cabin and you will discover all manner of niceties including dual-zone climate control, a six-speaker sound system and reclining rear seats. Also standard is a reverse camera, park distance control (great for the urban jungle) plus a useful multi-information display. ABS brakes with EBD are fitted to all 2021 B40 Plus models while the upper-tier City Hunter and Champion derivatives further benefit from an electronic stability programme, emergency brake assist, traction control as well as hill ascent and descent control. 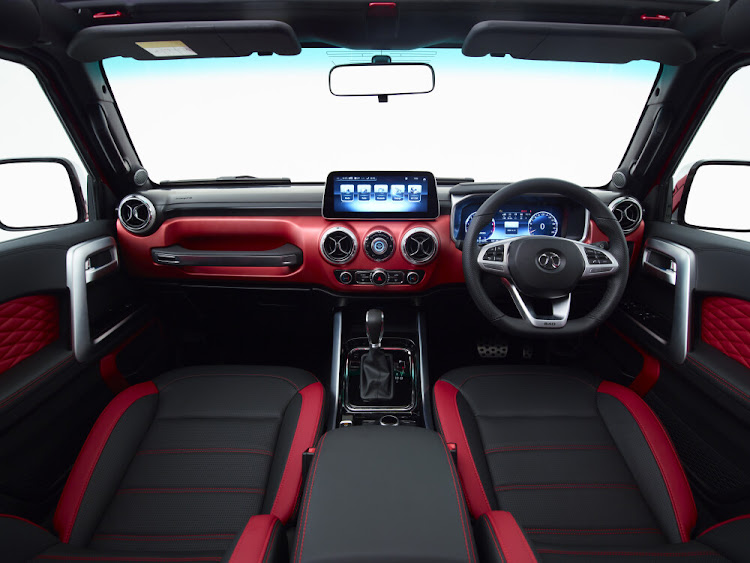 An uncluttered interior offers a reasonable number of features for the money.
Image: Supplied

Also interesting to note is that fact that all models in the range — B40 Plus, City Hunter and flagship Champion — are fitted with a built-in heavy-duty roll protection structure that can — according to the press release — apparently withstand a 50m hillside roll.

Powering the B40 Plus is a choice of two engines: a 2.0-litre four-cylinder turbocharged petrol making 160kW and 320Nm or a 2.0-litre four-cylinder turbodiesel good for 110kW and 350Nm. Depending on the model variant this is transferred to all four wheels via a six-speed manual or automatic gearbox. A locking rear differential is standard on both.

Impressive off-road prowess is ensured with the B40 Plus laying claim to a double-wishbone/coil spring set-up up front and a five-link/coil spring arrangement at the rear. Ground clearance measures 210mm while the approach angle comes in at 37 degrees. You can bank on a departure angle of 31 degrees and a ramp-over angle of 23 degrees.

Six things to know about the new 2022 Lexus LX

Lexus has finally unveiled its all-new 2022 LX: a gargantuan flagship SUV that merges proper off-road capability with new levels of luxury and ...
Motoring
1 week ago

Toyota on Wednesday launched its all-new Rumion MPV. Based on the Suzuki Ertiga and built to succeed the aged Avanza, this spacious seven-seater is ...
Motoring
1 week ago