The new Volkswagen Amarok is being unveiled this week

Volkswagen has confirmed its new second-generation Amarok will be unveiled during its digital premiere on the Volkswagen Nutzfahrzeuge YouTube page this Thursday.

Designed in Germany and Australia and set to be built right here in SA, the new Amarok is larger than the model it replaces. Measuring 5,350mm from nose to tail, Volkswagen claims that this newcomer is 96mm longer while the wheelbase has been stretched from 3,095mm up to 3,270mm — a tweak that will see passengers enjoy more interior space. At the same time Volkswagen has shortened the front and rear overhangs, which not only improves the vehicle's off-road capability but also strengthens its visual chops.

Depending on the model chosen, loads of up to 1.2 tonnes can be accommodated while maximum towing capacity now peaks at 3.5 tonnes. Customers can also look forward to a brand new range of wheel options and for the first time ever, the bakkie will, depending on the derivative, also be sold with ex-factory all-terrain tyres. With its intuitive controls, digital cockpit and tablet-style infotainment display, the Amarok’s interior has a high-quality functional appearance. The new digital cockpit and a vertically-aligned display unit with a 10 or 12-inch screen, offers a better view and extensive control options. 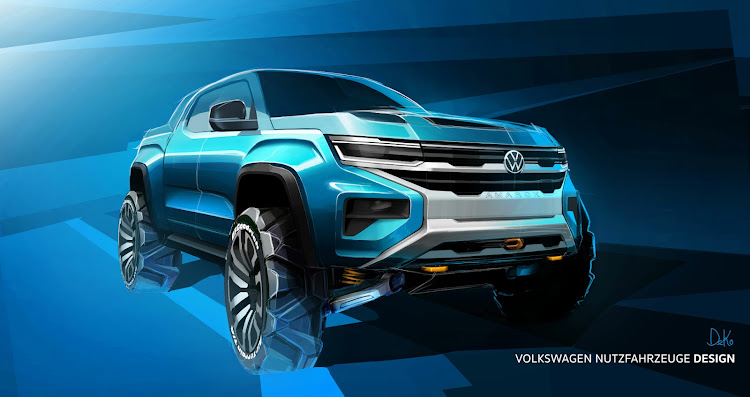 The new Amarok is expected to be more macho in the looks department.
Image: Supplied

The new Amarok model range also comes available with over 30 driver assist systems; 20 of which will be found in the new Amarok range for the first time. The local product line-up will incorporate a plethora of autonomous driving technologies for safer journeys.

Powering the new Amarok will be a choice of one petrol and four diesel engines, including an upgraded version of the powerful 3.0l V6 TDI used in the outgoing model — a favourite among the TimesLIVE Motoring team. These modern internal combustion mills will send their power to the ground via either a rear-wheel drive, on-demand or permanent all-wheel drive system aided by preconfigured driving modes to help conquer any terrain.

The unveiling of the new Volkswagen Amarok will take place on Thursday at 10am. It will retail in SA from the first quarter of 2023. Pricing will be confirmed closer to the time.

Five things to know about the new Mahindra Scorpio-N

Mahindra has unveiled its new Scorpio-N. Designed in collaboration with Italy's revered Pininfarina and built to take on bakkie-based rivals such as ...
Motoring
1 month ago