GM and Honda team up for fuel cell future 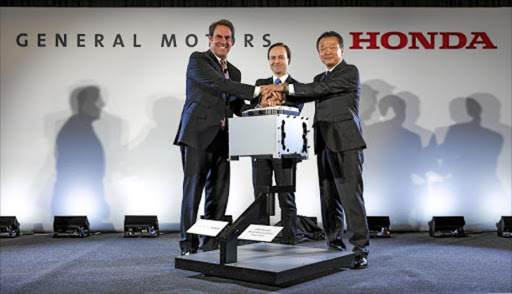 GM and Honda
General Motors and Honda are aiming to take on Toyota together, with the establishment of the auto industry’s first manufacturing joint venture to mass produce an advanced hydrogen fuel cell system to be used in future products from each company.

Fuel Cell System Manufacturing will operate within GM’s battery-pack manufacturing facility site in Michigan, US. Mass production of fuel cell systems is expected to begin around 2020. The companies are making equal investments totalling $85m in the joint venture.

Honda and GM have been working together through a master collaboration agreement announced in July 2013. The companies last collaborated in a powertrain cross-supply arrangement in 1999 under which Honda manufactured 50 000 V6 engines for the Saturn VUE and Honda received diesel engines from GM’s Isuzu affiliate for use in Europe.

"Over the past three years, engineers from Honda and GM have been working as one team with each company providing know-how from its unique expertise to create a compact and low-cost next-gen fuel cell system," said Toshiaki Mikoshiba, chief operating officer of the North American Region for Honda and president of Honda North America. "This foundation of outstanding teamwork will take us to the stage of joint mass production of a fuel cell system that will help each company create new value for our customers in fuel cell vehicles of the future," Mikoshiba said.