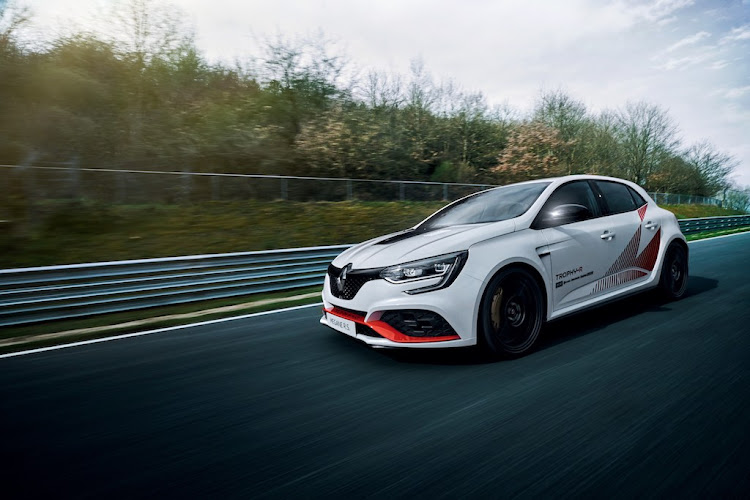 The Megane R.S. Trophy-R is now the fastest front-wheel-drive production car around the Nürburgring
Image: Renault

Do you care about Nürburgring lap times?

Me neither really, but this doesn't mean that car manufacturers will ever stop trying to outdo each other around the infamous Green Hell. Like Renault, who just used their new Megane R.S. Trophy-R to relegate the Honda Civic Type R to second place on the front-wheel-drive production car leaderboard.

With pilot Laurent Hurgon behind the wheel, this more focused version of the already quick Megane R.S. Trophy posted an official lap time of 7:40.100 – 3.7-seconds faster than the Civic.

Although the Megane R.S. Trophy-R has the same engine as its lesser sibling, a combination of weight-saving (up to 130kg depending on equipment levels), enhanced aerodynamics and a mixture of performance parts from the likes of Akrapovič, Brembo, Bridgestone, Öhlins and Sabelt means it is significantly quicker around a racetrack.

Production will be limited to a few hundred units and it's yet to be confirmed if any will actually make it here to South Africa. So for the time being you'll just have to satisfy your needs by watching this video of Mr Hurgon working his magic.

Some are practical and safe and some are downright unruly, tricky to drive and fearsome.
Motoring
2 years ago

Join Ignition TV presenters Shaun Korsten and Sbu Skosana as they tell you what's hot – and what's not – about the new Renault Koleos.
Motoring
2 years ago