Korean cars dominated the latest JD Power new-vehicle quality study in the US, with the Hyundai Motor Group filling the top three positions.

In its 33rd year, the 2019 US Initial Quality Study (IQS) is based on responses from 76,256 purchasers and lessees of new 2019 model-year vehicles who were surveyed after 90 days of ownership.

Initial quality is measured by the number of problems experienced per 100 vehicles (PP100) during the first 90 days of ownership, with a lower score reflecting higher quality. In this year’s study, only 13 brands improved, while 18 worsened. The industry average remained unchanged at 93 PP100.

Infotainment problems are decreasing yet remain the most problematic category for new-vehicles but shows improvement from 2018, led by fewer problems for voice recognition and Bluetooth.

“More brands worsened than improved over the past 12 months but automakers continue to make progress in areas like infotainment systems,” said Dave Sargent, VP of Global Automotive at JD Power.

“However, some traditional problems crept up this year including paint imperfections, brake and suspension noises, engines not starting and the ‘check engine’ light coming on early in the ownership experience. Also, more people report issues with advanced driver assistance systems as they become more widespread and increasingly complex.”

In addition to the Hyundai Motor Group taking the three highest-ranking brands in 2019, 16 of 18 models from the group rank in the top three in their respective segments.

This is the second year in a row that the three Korean brands are at the top of the overall ranking, and Kia’s fifth consecutive year as the highest-ranked mass market brand.

The Porsche 911 again achieved the best overall score for an individual model range. The Kia Rio was tops in the small car segment, the BMW 2 Series was the highest ranked small premium car, the Mercedes-Benz scooped the midsize premium category, and the Mini Cooper took the compact sporty car class.

The highest ranked small SUV was the Kia Sportage, the Hyundai Santa Fe topped the medium SUV class, and the best compact premium SUV was the BMW X4. 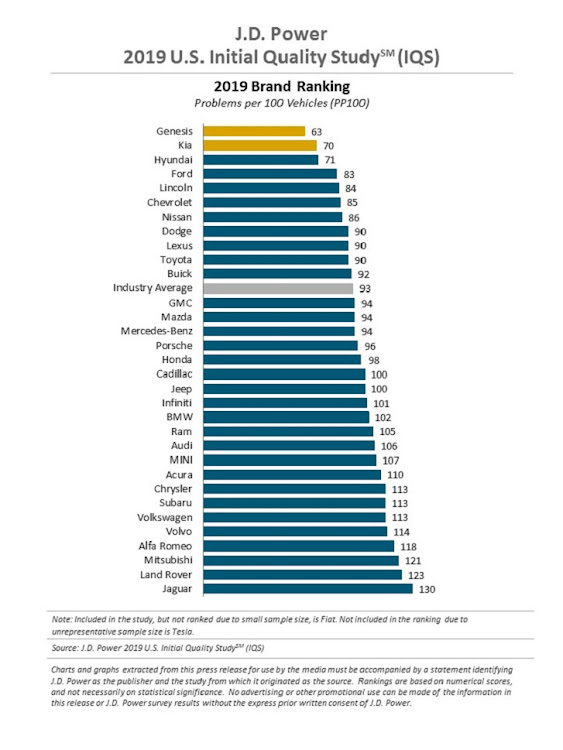 The graph shows how many problems per 100 cars were experienced by various brands. Picture: SUPPLIED
Next Article