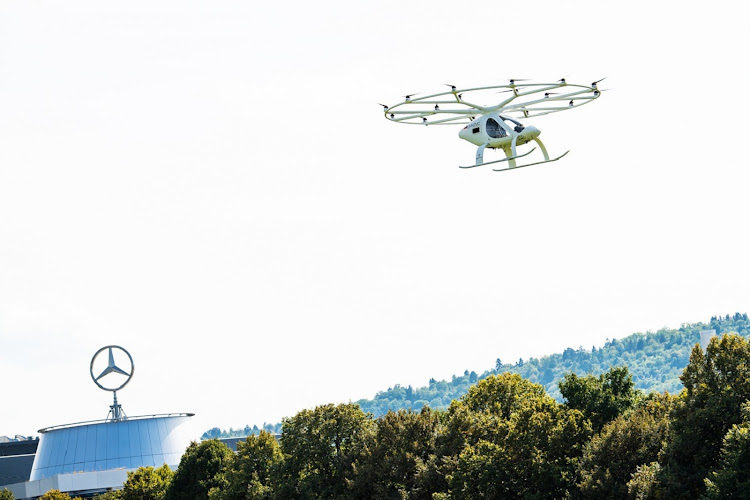 Flying taxis got a step closer to becoming a reality when a Volocopter prototype was demonstrated at Daimler’s headquarters in Stuttgart, Germany.

The German startup, which hopes to have autonomous air taxis in the sky within the next few years, has been boosted by a €50m funding injection from Chinese motor firm Geely and others.

Volocopter, which is building the manned, electric and vertical take-off and landing (VTOL) air taxis, said that other investors in the new funding round include German luxury car maker Daimler, which it had previously raised money from.

The electric Volocopter will provide air taxi services in urban areas, and is aimed at quick point-to-point transport in cities to bypass traffic. It is essentially a giant drone but made robust enough to transport two adult passengers.

The prototype uses 18 rotors powered by electric motors and is capable of vertical take-off and landing. It has a range of 27km and top speed of 100km/h.

There are a number of companies developing VTOL air taxis, including Uber and AeroMobil, but Volocopter displayed an actual prototype in flight.

Florian Reuter, CEO of Volocopter, said: “Our Volocopter air taxis open up a completely new dimension in urban mobility. As Stuttgart has seen today, they fly safely, quietly and are fast approaching the implementation stage. Volocopter air taxis are able to ease traffic congestion in major cities around the world.”

Daimler chair Ola Källenius, who was present at the Volocopter demonstration at the Mercedes-Benz museum, said: “Our partner Volocopter shows how an air taxi is turning the dream of driving into the dream of flying. At Daimler we work on the mobility of the future too.

“By 2022 we will have electrified the entire Mercedes-Benz portfolio. Our goal is that electrically powered cars will account for more than half of our sales by 2030.”