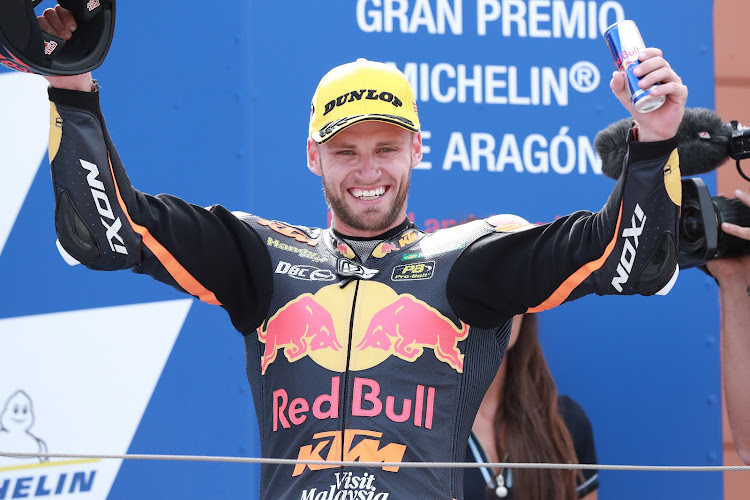 SA’s Brad Binder, who is sponsored by Red Bull, moves up to MotoGP next year to race against Marc Marquez and Valentino Rossi.
Image: Supplied

Red Bull has launched a limited-edition can featuring Brad Binder to celebrate the South African’s impending move to the premier MotoGP racing class next year.

The 2016 Moto3 world champion, who is sponsored by the energy drinks company, will step up to MotoGP aboard a KTM after three seasons in the intermediate Moto2 class where he has claimed five victories and 12 podiums to date.

“It’s pretty crazy to have your face on a Red Bull can!” commented Binder. “I don’t think I’ll get used to it!”

“To know that there are so many people back home supporting me is crazy. I miss everything about SA when I’m away – the food, the people. I’m really looking forward to my move to MotoGP next year and hope to make everyone proud,” Binder added.

The 24-year-old made his Grand Prix debut in 2011 and grabbed his first silverware in 2014. He claimed the 2016 world title in just his second term with Red Bull KTM Ajo, becoming SA’s first world champion in 36 years and just the third from his country. He graduated immediately to Moto2 with the same team where he has raced ever since.

His third season in Moto2 started slowly but he’s steadily gained momentum and won his second race of the season at Aragon, Spain, in mid-September. That result made it two wins and three podiums in the last seven races. Binder wrapped up a great weekend in Thailand with another podium result when he gained 10 positions in the race and finally finished second after a great move on the last corner of the last lap.

“For sure, it’s going be really difficult at the beginning especially,” Binder said on the step up to MotoGP. “However it’s going to be incredible lining up on the grid with Valentino Rossi and a lot of my heroes. It’s an incredible feeling and I can’t wait for it to all start.”

In addition to the limited-edition can, Red Bull is offering consumers the chance to win a trip to watch Binder race at the Spanish MotoGP in Jerez in May next year.

To stand a chance to win, consumers need to make use of two exciting augmented reality filters and upload their video of support using the hashtag #ALL41BINDER. More information is available here.

Brad Binder is moving up to MotoGP in 2020