BMW still sees hydrogen-powered cars as part of its future 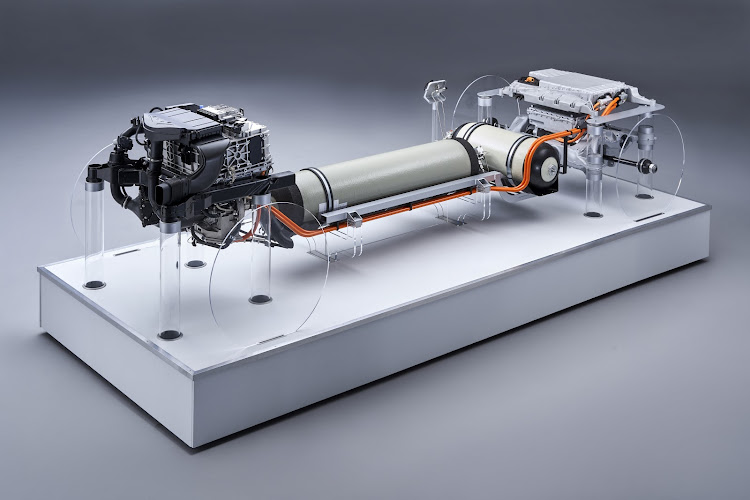 The new BMW hydrogen fuel cell powertrain will form part of a mixed bag of drive modules ranging from full electric to hybrids in the near future. Picture: SUPPLIED

BMW’s search for sustainable powertrain technologies has the German brand show the first virtual insights of a hydrogen-fuelled powertrain system for the BMW i NEXT cars.

Hydrogen power will exist alongside its hybrid and full electric technologies.

Klaus Fröhlich, member of the board of management of BMW and R&D leader, said: “We are convinced that various alternative powertrain systems will exist alongside one another as there is no single solution that addresses the full spectrum of customers’ mobility requirements worldwide. Hydrogen fuel cell technology could quite feasibly become the fourth pillar of our powertrain portfolio in the long term.”

The upper-end models of BMW’s X family of SAVs are said to be suitable candidates for hydrogen power, thus the company is piloting a small batch of current X5 models with a new hydrogen fuel cell electric powertrain with the aim of introducing it in its iNext SUV as showcased in 2019.

“In our view, hydrogen as an energy carrier must first be produced in sufficient quantities at a competitive price using green electricity. Hydrogen will then be used primarily in applications that cannot be directly electrified, such as long-distance heavy duty transport,” said Fröhlich about the powertrain the group hopes to showcase in marketable form by 2022.

“The requisite infrastructure, such as an extensive, Europe-wide network of hydrogen filling stations, is also lacking at present,” he said. In its current technical state, the hydrogen powertrain generates up to 125kW of electric energy from the chemical reaction between hydrogen and oxygen, with the resulting emissions being nothing but water vapour.

The electric converter located underneath the fuel cell adapts the voltage level to that of both the electric powertrain and the peak power battery, which is fed by brake energy as well as the energy from the fuel cell.

The vehicle will also accommodate a pair of 700 bar tanks that can together hold 6kg of hydrogen, which guarantees a long range in all weather conditions. Refuelling is expected to take only three to four minutes.

The fifth-generation eDrive unit is also set to make its debut in the electric BMW iX3 and will be fully integrated into the BMW i Hydrogen NEXT car. The peak power battery positioned above the electric motor injects an extra dose of juice when overtaking or accelerating with a total system output of 275kW.

BMW has been working with Toyota on some technology and the Japanese carmaker already has the hydrogen-fuelled Mirai in the market.

New VW Amarok to be built in SA alongside the Ford Ranger, says source

Emblems 101: How Abarth got its sting

Of all the many automotive crests in the world today, Abarth's is probably one of the most distinctive as it forgoes the usual four-legged land ...
Motoring
2 years ago

We're paying way too much tax for our fuel, says Outa's Duvenage

Despite a 28% drop in the basic fuel price due to weaker international oil prices from March to April this year, the local fuel price has been ...
Motoring
2 years ago