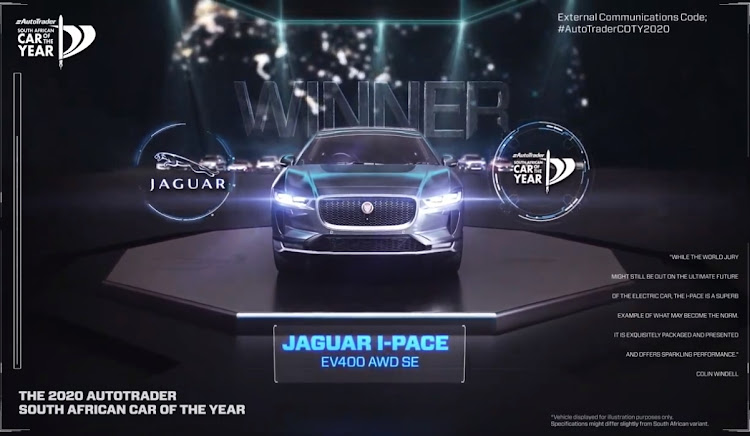 The Jaguar I-Pace won SA's 2020 AutoTrader-sponsored Car of the Year title. The announcement was made online due to the lockdown.
Image: Denis Droppa

The Jaguar I-Pace is SA’s 2020 Car of the Year, the first time an electric vehicle has won the contest.

The winner in the AutoTrader-sponsored competition, as voted for by a 25-member jury of the Guild of Motoring Journalists, was announced in a live stream hosted on YouTube on Tuesday afternoon.

The I-Pace, the first Jaguar to win the annual competition, also won the Premium Car category.

The accolade is the latest in a long line of victories for the all-electric luxury SUV. It won the 2019 World Car of the Year, World Car Design of the Year and World Green Car awards. It also claimed the European Car of Year title last year.

The Mercedes-Benz GLE was voted second overall and won the Premium SUV category, with the Toyota GR Supra third overall and tops in the Sports Performance category.

Last year’s winner of the AutoTrader South African Car of the Year was the Mercedes A-Class.

Can you use an electric vehicle for your holiday road trip?

We undertake a range-anxiety test by driving from Joburg to Durban in a Jaguar I-Pace, using not a drop of fuel
Motoring
2 years ago

Jamie Chadwick raced McLaren's Lando Norris in the virtual world at the weekend but Covid-19 could put the brakes on hopes of her joining the Formula ...
Motoring
1 year ago