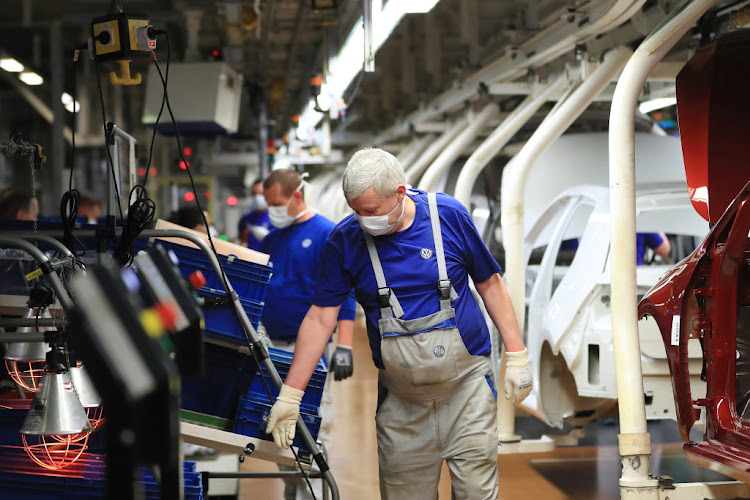 Volkswagen will restart production at its Wolfsburg factory in Germany on Monday, the latest of a fleet of European car makers to take advantage of eased coronavirus lockdown rules to resume manufacturing.

VW, the world's largest car manufacturer, is celebrating the reopening of its biggest plant, in Wolfsburg, by projecting a cartoon of a VW logo squashing coronaviruses.

Encouraged by a fall in infection rates, Germany has allowed small retail stores to reopen, provided they adhere to strict distancing and hygiene rules. Now large corporations are following suit.

BMW, Daimler and VW are banking on Germany’s ability to trace and contain the new coronavirus, and a health care system capable of extensive testing to identify possible carriers of the disease.

This stands in stark contrast to the US, where the head of the United Auto Workers union said on Thursday it was “too soon and too risky” to reopen auto plants in early May, citing insufficient coronavirus testing.

As part of Volkswagen's cartoon, the VW logo celebrates with a “thumbs-up” after defeating the virus.

“On Monday, the German auto industry is back. We at Volkswagen have used the five-week pause to prepare ourselves for restarting production,” said VW works council chief Bernd Osterloh.

BMW says it is cranking up engine manufacturing starting this Monday. BMW wants to reopen its British plant in Goodwood and its Spartanburg, South Carolina facility on May 4, followed by Dingolfing, Germany and San Luis Potosi in Mexico on May 11, depending on market demand, the carmaker said.

Other plants in Leipzig, Regensburg, and Rosslyn South Africa will open after May 18, starting with a one-shift system, the carmaker said. BMW's factory in Shenyang, China, has been producing since February 17.

Workers need to wear masks and keep a distance from one another. The seating order on BMW factory buses has been changed, as has the process for entering and exiting the bus.

Workers need to come to the plant already wearing their factory clothes, to avoid time stuck in changing rooms, and designated pathways in the plant have been altered to ensure there is “one-way” traffic only, BMW said.

Mercedes-Benz plants in Sindelfingen and Bremen are also making preparations to ramp up production.

Unlike Italy and Spain, Germany did not ban car production, though factories came to a standstill after authorities restricted the movement of people and ordered the closure of car dealerships, hitting demand.

Fiat Chrysler will open its Sevel plant in central Italy on Monday, with plans to resume production at a rate of between 70%-80%.

In France, Toyota this week restarted an assembly plant in Valenciennes and Renault began producing engines at its factory in Cleon, west of Paris. It will be followed by Renault’s Flins plant, west of Paris, where only 25% of the workforce is due to resume work.

“The economy has come to a halt in Europe. A vaccine will take a long, long time. It is important to restart in a safe way. Hopefully we can contribute to a normalisation,” Volvo cars CEO Hakan Samuelsson told Reuters.

No, you won't be able to buy (or service) a car just yet

Motor dealers have to wait for level 3 to open their doors, but automotive factories may start producing vehicles again from May 1
Motoring
1 year ago

Ferrari have said they remain committed to Formula One after reports on Thursday that the sport's oldest and most successful team could walk away if ...
Motoring
1 year ago