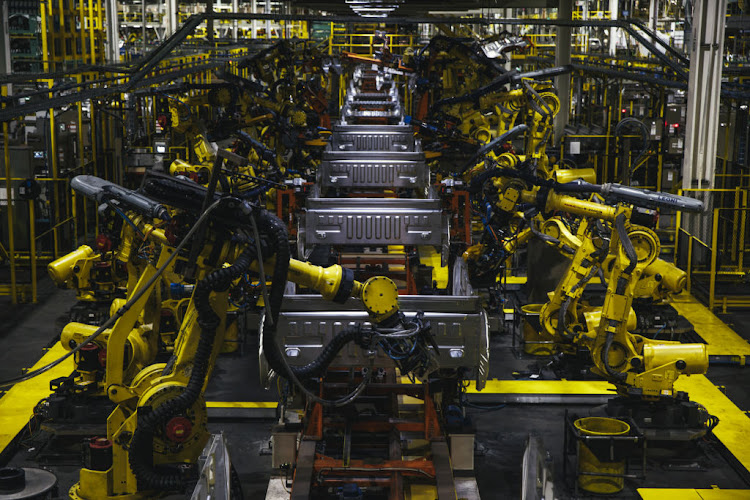 Robotic arms operate on the bed frame of a truck at the Ford Motor Co. Dearborn Truck Plant in Dearborn, Michigan, US.
Image: Sean Proctor/Bloomberg via Getty Images

Ford Motor Co said on Tuesday its second-quarter loss would more than double to over US$5bn (roughly R92.8bn) from $2bn (R37.1bn) in the first quarter due to the affect of the coronavirus pandemic, but added it had enough money despite the crisis to last the rest of 2020.

“We believe the company's cash is sufficient to take us through the end of the year, even with no additional vehicle wholesales or financing actions,” CFO Tim Stone said in a statement.

But he called the current economic environment “too ambiguous” for the No. 2 US car maker to give a full-year 2020 earnings forecast.

“There's no denying the negative economic consequences of a pandemic,” CEO Jim Hackett said on a conference call with analysts.

The Dearborn, Michigan-based company has slashed costs during the Covid-19 outbreak to weather the shutdown, including cutting salaries of executives and white-collar employees.

Ford also moved to cut spending on projects, saying on Tuesday it was pushing back its commercial autonomous vehicle services by a year to 2022 and that it had decided not to develop a previously announced luxury electric Lincoln sport utility vehicle in partnership with electric vehicle maker Rivian.

Ford shares were down more than 4.6% in after-hours trading on Tuesday after closing the regular session at $5.38 (roughly R99.88).

Ford’s market value of $20.6bn (about R382.4bn) is now less than the $35bn (R649.8 bn) in cash it had on hand as of last Friday, an indication that investors expect the company to burn through significant amounts of cash before a recovery takes hold.

Last month, Ford moved to hoard cash on its balance sheet, drawing down $15.4bn (roughly R285.9bn) from two credit lines and suspending its dividend, in a move to bolster reserves to ride out damage to its business.

As soon as 'practicable'

Virtually all US automotive production ground to a halt in March as the number of Covid-19 infections grew rapidly. But with President Donald Trump pushing for Americans to get back to work and several US states beginning to reopen their economies, the focus in the auto sector has shifted to when production can be restarted.

In an earlier conference call with reporters, Stone, the CFO, said the company would restart US production “as soon as practicable,” but did not give a timeline.

Ford's captive finance arm posted $30m (roughly R557m) in first-quarter pretax earnings, down $771m (R14.3bn) from a year ago. That included $600m (R11.14bn) in additional-loss reserves, plus higher depreciation of former lease vehicle sales and expected lease defaults — in preparation for the estimated future affect of the coronavirus on the finance unit's performance.

Ford, General Motors Co and Fiat Chrysler Automobiles NV (FCA) are aiming to resume production some time in May, and are negotiating with the United Auto Workers (UAW) union, which represents their US hourly workers, about how to safely resume vehicle production. FCA and GM are scheduled to report quarterly results on May 5 and 6, respectively.

Last week, the UAW said it was “too soon and too risky” to reopen auto plants in early May.

Ford, whose credit rating has been downgraded to “junk” status by Standard & Poor's, said previously it hoped to resume production in April at plants that make its most profitable vehicles, but subsequently backed off those plans.

Ford said on Tuesday it would restart most of its European manufacturing starting next Monday. It has already resumed operations in China, where the pandemic began and where sales fell 35% in the first quarter. US sales fell 12.5%.

Once North American production resumes, the question will be how fast US demand bounces back.

Ford said it expected to spend $700m (roughly R13bn) to $1.2bn (R22.28bn) on its global restructuring this year, but executives said the car maker was looking at additional actions.

Global vehicle sales by Japanese car makers dropped by 34% in March, when the coronavirus outbreak spread worldwide - and are set to fall further in ...
Motoring
1 year ago

Harley-Davidson Inc reported a drop of about 45% in quarterly profit on Tuesday as motorcycle sales took a hit from global lockdowns due to the ...
Motoring
1 year ago

Nissan Motor Co on Tuesday said it expected to post an operating loss for the year that ended in March, as an ongoing decline in sales is exacerbated ...
Motoring
1 year ago