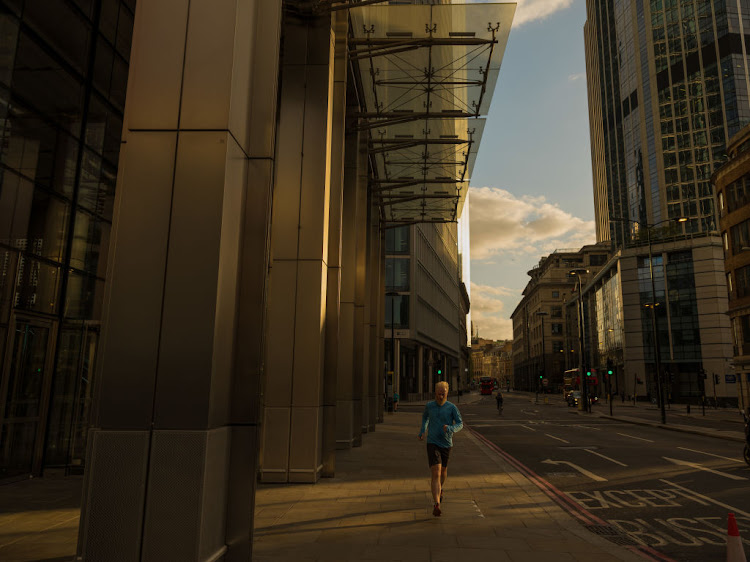 A jogger runs in The City of London financial district in London, UK, on Monday, April. 6, 2020.
Image: Jason Alden/Bloomberg via Getty Images

London's “Square Mile” financial district said it will close some streets to cars to create more space for pedestrians and cyclists so that workers can observe social distancing when the coronavirus lockdown is lifted.

Britain began easing restrictions this week but said people who can work from home should continue to do so, as most financial sector staff have been doing since March.

The financial district is home to the Bank of England, the London Stock Exchange and Lloyd's of London insurance market, and many of its pavements are too narrow for the 522,000 people who work there to maintain safe social distancing, a report for City of London councillors said.

It proposed widening pavements, and shutting some roads to cars completely or during business hours, which a panel of the city's councillors approved on Thursday.

“While most people who work in the Square Mile can work from home it is likely that people will begin travelling to work over the coming weeks,” the report said.

“Any meaningful return to the workplace will need to be primarily by walking, cycling and public transport.”

But 74% of commuter journeys to the city are longer than 10km, making public transport the only feasible option for many, the report said.

Separately, London's transport system said it was increasing services over the next week but capacity would be cut to about 15% to maintain social distancing for passengers.

Furthermore, Britain's Financial Conduct Authority reiterated this week that only a limited number of staff designated “key workers” can go to the office for now.

Bankers said this week that some staff could be working from home for up to a year before they return to the city or Canary Wharf, London's other financial district.

While SA experienced a significant drop in vehicle crime during the national lockdown, activities are returning to normal levels as the country's ...
Motoring
1 year ago