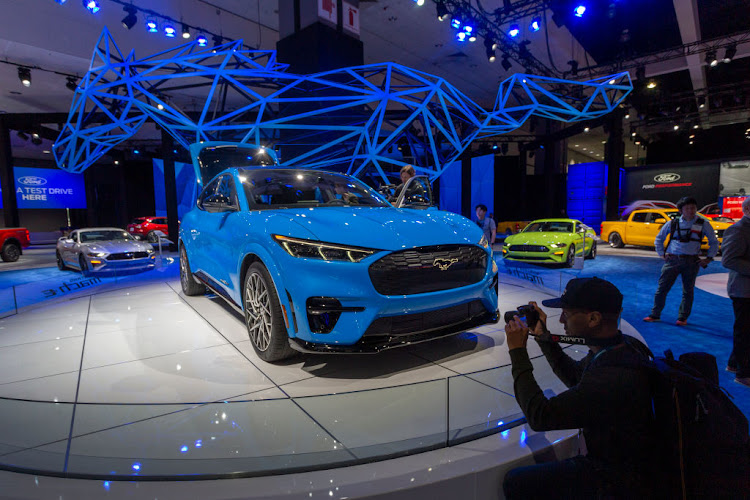 The electric Ford Mustang Mach-E is shown at AutoMobility LA on November 21 2019 in Los Angeles, California. The company on Thursday announced plans to offer hands-free driving on the latest model of the car.
Image: David McNew/Getty Images

Ford Motor Co said on Thursday that it will offer hands-free driving on its new Mustang Mach-E in fall 2021 - six years after Tesla and four years after General Motors introduced similar systems.

The system, called Active Drive Assist, will be offered on several Ford models, most notably the Mustang Mach-E, an all-electric crossover vehicle that goes on sale later this year and is targeted at the Tesla Model Y market.

Ford said US buyers can order the Mustang Mach-E this autumn with the Active Driver Assist hardware package, which includes extra radar sensors and a driver-facing camera, but the software won't be ready until autumn 2021.

Tesla has constantly revised and updated Autopilot and now offers the feature across its entire four-model range. GM is expanding Super Cruise to other Cadillac models this autumn and will offer an enhanced version to other GM brands over the next three years.

First BMW released its newly fettled M5. Now Mercedes-AMG has taken the covers off its freshly facelifted E63 S. Yep, it's a veritable feast for fans ...
Motoring
1 year ago

24 Hours of Le Mans schedule condensed due to pandemic

The rescheduled 24 Hours of Le Mans in September 2020 will be condensed into a four-day timetable incorporating free practice, qualifying, warm-up ...
Motoring
1 year ago

Life in SA as we used to know it has changed dramatically under lockdown. So too have car buying patterns. For instance, searches for second-hand ...
Motoring
1 year ago