In an ongoing Black Lives Matter campaign, the F1 champion wore a shirt branded 'Arrest the cops who killed Breonna Taylor' at the Tuscany Grand Prix 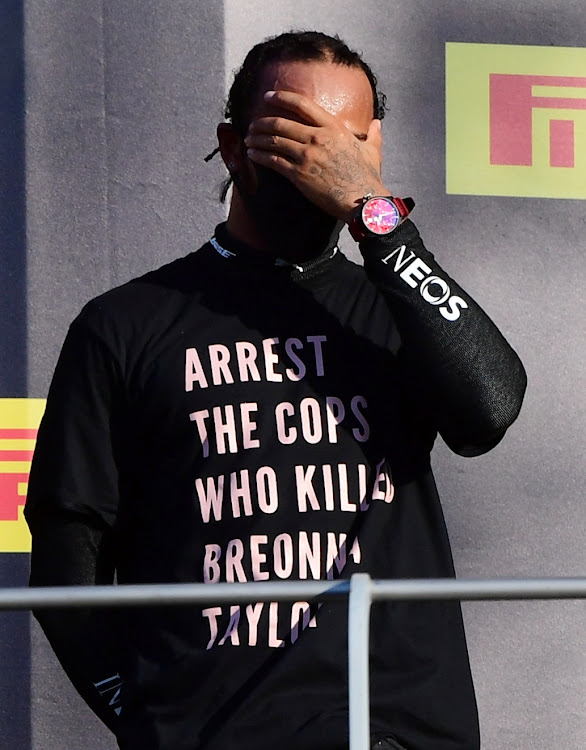 Hamilton said the shirt he wore at the Tuscan GP is fighting the same thing as the 'Black Lives Matter' T-shirt he has been wearing.
Image: Reuters

Formula One world champion Lewis Hamilton could face investigation by the motorsport governing body FIA for wearing a T-shirt branded "Arrest the cops who killed Breonna Taylor" at the Tuscan Grand Prix.

An FIA spokesperson confirmed to the BBC that an investigation was "under active consideration".

The FIA does not allow political statements to be made at its event, having censured organisers at the inaugural Turkish Grand Prix. The world champion could face investigation.

Asked whether the message on the shirt is considered political, the spokesperson added: "That's the consideration we are looking into."

"It is entirely his decision," said team boss Toto Wolff in reaction to the T-shirt. "Whatever he does, we will support.

"The team is fighting against any kind of racism and discrimination - and it is Lewis's personal fight for Black Lives Matter - and with all the support we can give him. It's his call."

The FIA decrees that competitors "refrain from manifesting discrimination on account of race, skin colour, gender, sexual orientation, ethnic or social origin, language, religion, philosophical or political opinion, family situation or disability in the course of its activities".

The sporting code also forbids competitors from "affixing to their automobiles advertising that is political or religious in nature or that is prejudicial to the interests of the FIA".

Asked at the post-race press conference if the shirt marked a change in direction from the Black Lives Matter T-shirt he has been wearing, Hamilton replied: "Not much of a change, it's still fighting the same thing. It's just ... it took me a long time to get that shirt."

Six-times Formula One (F1) world champion Lewis Hamilton took a knee before the start of the Tuscan Grand Prix on Sunday with a message on his shirt ...
Sport
7 months ago

Hamilton on brink of Schumacher record after three-in-one win

Six-times world champion Lewis Hamilton took his tally of Formula One wins to 90 and the brink of Michael Schumacher's record on Sunday, but said it ...
Motoring
7 months ago

Six-times Formula One world champion Lewis Hamilton has called for a rethink on how races are restarted behind the safety car because he fears ...
Motoring
7 months ago
Next Article