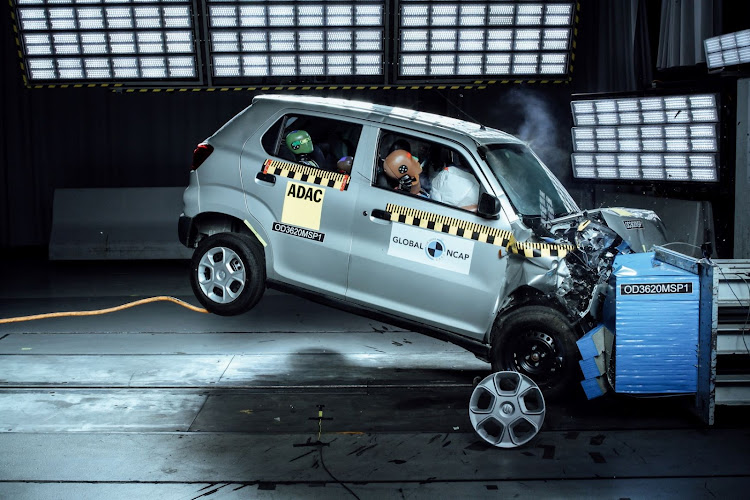 The Suzuki S-Presso has finally been crash-tested by the safety experts at Global NCAP.

And the results, dear readers, are not pretty. Manufactured by Suzuki's Indian division, Maruti, the S-Presso put on an absolutely dismal performance scoring zero stars for adult occupants and two stars for child occupants. This puts it on par with the Datsun Go and Renault Kwid. Although the Kwid did manage to score one star in subsequent testing.

Granted, the S-Presso tested by Global NCAP was fitted only with a driver's side airbag (the version sold in SA gains one on the passenger side and comes equipped with front seat-belt pre-tensioners) but after analysing the crash data we can't see how much of a difference this would actually make. Especially as the car's body shell was rated as “unstable” and “not capable of withstanding further loadings”.

This news is disappointing because the TimesLIVE Motoring team reviewed the S-Presso earlier this year and all of us were impressed at the way it drove and what it offered in terms of interior amenities. Though many of us wanted to, we were hesitant to recommend it due to the absence of crash testing. Well, we don't have to any more — avoid.

Click here to read the full crash report for yourself.

Note to readers: This article was updated on November 16 2020 to reflect that, in addition to an extra front airbag, the Suzuki S-Presso currently on sale in SA is also equipped with front seat-belt pre-tensioners, which were absent from the model crash-tested in India.

Which of these thrifty compacts offers best bang for buck?
Motoring
6 months ago

Commercially, the Renault Kwid has proven to be a runaway success. That is undisputable – with the impressive sales figures as concrete support. ...
Motoring
9 months ago

It's been five years and a couple of months since the insipid and unsafe Datsun Go has been tempting first-time car buyers with the allure of cheap ...
Motoring
7 months ago
Next Article