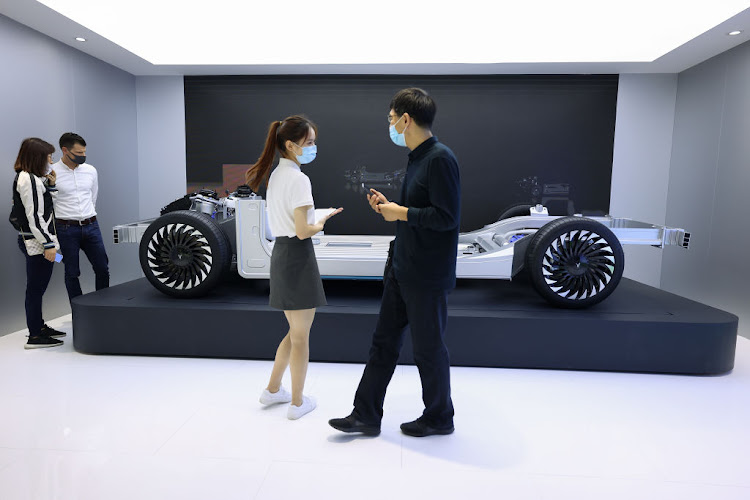 People wear protective masks as they get a look at the A Voyah EV model car during the 2020 Beijing International Automotive Exhibition at China International Exhibition Centre on September 27, 2020 in Beijing.
Image: Lintao Zhang/Getty Images

An aggressive China-led shift to electric vehicles is expected to slash global oil demand growth by 70% by 2030 and will help bring an end to the “oil era”, according to research by the Carbon Tracker think tank published on Friday.

Its calculations were based on a “conservative” scenario by the International Energy Agency projecting that electric vehicles would account for 40% of China's total car sales by 2030, and for 20% of sales in India and other emerging markets.

The cost of importing the oil required to fuel an average car is 10 times higher than the cost of solar equipment required to power an electric vehicle, Carbon Tracker said.

“This is a simple choice between growing dependency on what has been expensive oil produced by a foreign cartel, or domestic electricity produced by renewable sources whose prices fall over time,” said Kingsmill Bond, strategist with Carbon Tracker and the report's lead author.

China has not yet set a date when it will ban the production and sale of traditional cars, but an industry official said last month that NEVs will account for 50% of all new car sales by 2035, with hybrid vehicles making up the remainder.

BMW on Wednesday said it will retool its German factories to build electric cars and components and shift manufacturing of combustion engines to ...
Motoring
7 months ago

Britain will ban the sale of new petrol and diesel cars and vans from 2030, five years earlier than previously planned, as part of what prime ...
Motoring
7 months ago

Electric vehicle startup Rivian, which is backed by Amazon and Ford Motor Co, on Wednesday said it plans to follow up its first two products, a ...
Motoring
7 months ago