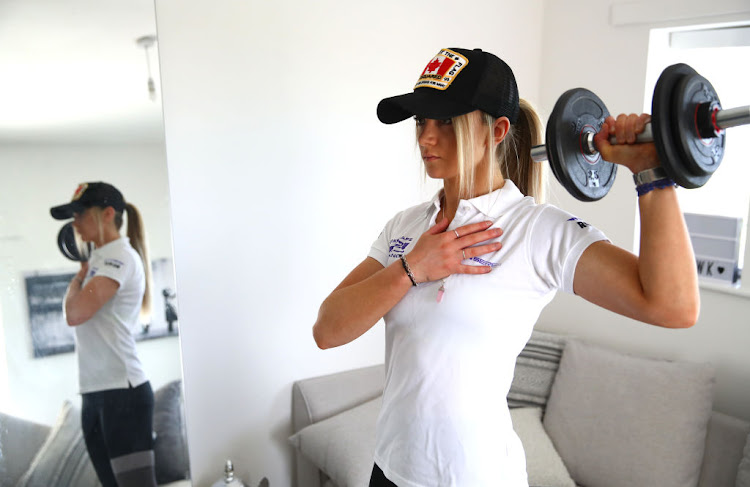 W Series racing driver Jessica Hawkins during an isolation training session at her home on May 20 2020 in Kettering, UK.
Image: Mark Thompson/Getty Images

The team of four-times world champion Sebastian Vettel and Lance Stroll said on Wednesday she will work with partners and “across a variety of disciplines”.

If somewhat vague on detail, the new job could involve the 26-year-old Briton showing off some of the skills featured in the yet-to-be-released Bond movie No Time to Die.

“I enjoy sending cars sideways almost as much as I do racing,” she told Reuters.

Aston Martin, the fictional British secret agent’s car of choice, have played up the Bond connection since returning to Formula One this season in a rebranding of Silverstone-based Racing Point.

Their F1 car launch in March was presented online by Quantum of Solace actress Gemma Arterton with Bond actor Daniel Craig delivering a message of support.

Hawkins, a former British karting champion, also has racing credentials, though far from the level required to obtain a Formula One super-licence.

The all-female W Series is supporting Formula One and Hawkins follows defending champion Jamie Chadwick, who has a development role with Williams, in forging a connection to an F1 team.

Daughter of an air-conditioning fitter, her racing career stalled for a lack of cash until the Formula Three-level W Series came along in 2019 with all costs paid.

“When I was 10 or 11 I was named the female most likely to make it to Formula One and it never materialised,” said Hawkins, who recalled once beating future Red Bull F1 driver Alexander Albon.

“I may not have made it but I’m certainly proud of where I am and the journey I’ve been on to get to where I am.”

Some up, some down – that’s the picture for the month-end fuel price adjustment, according to the Automobile Association, which was commenting on ...
Motoring
1 month ago