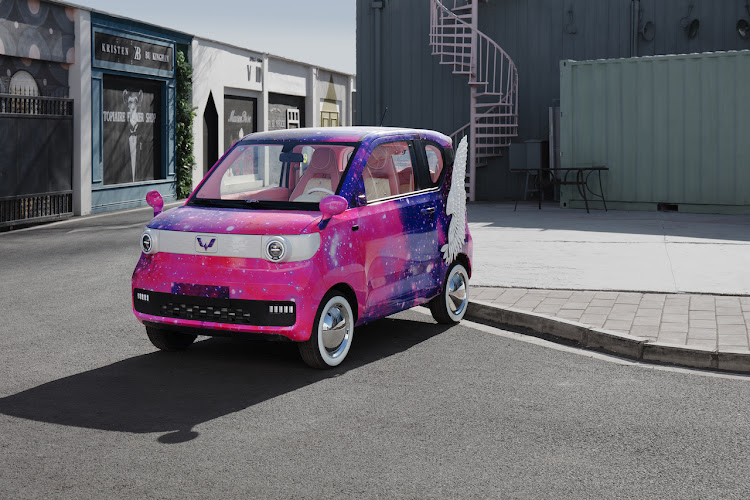 Since last July, a little-known car maker in China’s southwest has dominated the world’s largest electric car market, outselling bigger players and even Tesla almost every month with a tiny, bare-bones EV that starts at just $4,500 (roughly R60,767).

Based in the city of Liuzhou, known for its limestone mountains and river-snail soup, the company — which has sold some 270,000 of the cars within nine months, making it the best-selling EV in China — has even bigger ambitions for the future. It’s aiming for annual sales of 1.2 million vehicles next year, almost equal to the number of EVs churned out by China’s car makers in 2020 combined.

It’s an eyebrow-raising target, but even before the Hongguang Mini, Wuling had a track record for producing winners in a market that’s defining the new era of driving. Set up in 2002, the Chinese-American JV built its business selling microvans: dependable sliding-door workhorses that earned the nickname “the bread box car” in Mandarin, and were China’s top-selling passenger vehicle in 2017. Millions of them ply the country’s roads, used by contractors and delivery drivers alike.

The buyers of those gas-guzzling grey vans are almost exclusively male, which makes Wuling’s pivot to the Hongguang Mini — which has a top speed of 100km/h and 12-inch wheels — all the more extraordinary. Shortly after its debut last July, the makers realised the vehicle was gaining a following among young women, a phenomenon it leaned into with an approach that bends conventional wisdom about how cars are sold.

“Our company’s mentality is to produce whatever people need,” Wuling’s head of branding and marketing, Zhang Yiqin, said in an interview. “We keep close tabs on our users. The hurdles to electric car adoption can be cleared only when consumers find using them a comfortable thing.”

To that end, Zhang has staffed his team with employees who understand the Hongguang Mini’s customer base, which is now around two-thirds female. At 35, he jokes he’s the elder statesman of the group whose age averages around 27. Slogans like “Young and Eager” are splashed across the walls of Wuling’s headquarters in Liuzhou, a city that’s embraced EVs alongside the company with 30% of all car sales electric last year, the highest rate in China, according to WAYS Information Technology.

Wuling’s success with the Hongguang Mini was driven by a targeted marketing campaign conducted almost entirely online, according to Zhang. His team often communicate with consumers directly via various social media platforms, and it was a customer’s request for more hues that saw the company come up with Hongguang Mini’s latest iteration — the Macaron. It comes in avocado green, lemon yellow and white peach pink, with an optional solid-colour roof for contrast, to mimic the vanilla butter cream that sandwiches the French meringue confections of the same name.

It’s also how they landed on one of the car’s key selling points — besides its rock-bottom price point: Hongguang Mini drivers are able to customise their vehicles in a way that’s not possible elsewhere. 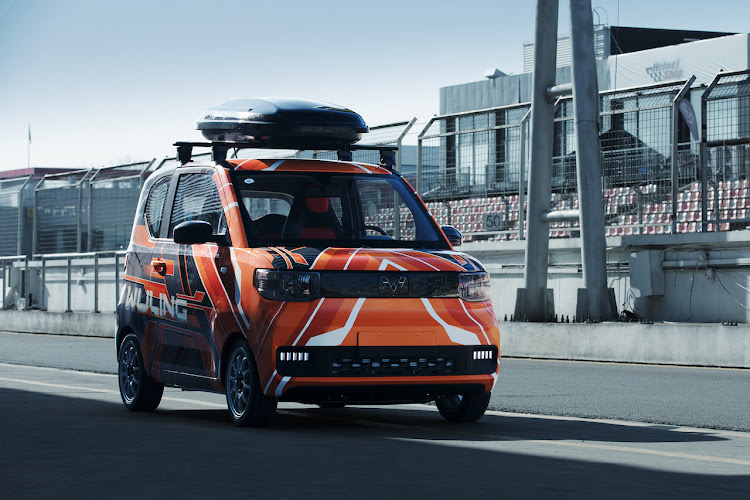 Using “stickers,” the car’s panels and body can be transformed. Some sport the Nike swoosh, some have galaxy-like outer space scenes and others cartoon characters from Hello Kitty and Doraemon. The original Hongguang Mini comes in around 20 different base colours, which can be switched up, and buyers can customise the interior as well.

Zorah Zhang (no relation) is a typical client. The 23-year-old is a fan of Hayao Miyazaki, the Japanese animator who directed My Neighbor Totoro, a fantasy film featuring a character called The Catbus, a grinning feline whose seats are covered in fur.

She’s pimped her Hongguang Mini to resemble it, spending around 15,000 yuan (roughly R31,000) to cover the car’s interior with brown velveteen and studding the roof with lights that sparkle at night.

“A lot of my friends have the Mini, you see them everywhere in Liuzhou,” said Zhang, who lives with her parents (they drive a BMW sedan). “I love things that reflect my character. I may change the look of the car again if there’s other stuff I fancy.”

As frivolous as turning a set of wheels into a fashion accessory may seem, there’s a very real market up for grabs.

Outside Liuzhou, EV penetration in China is still only around 6% and competition is fierce. Tesla may be the name that resonates loudest, particularly in larger cities like Beijing and Shanghai where its first Gigafactory is located, but a host of newer, local entrants from Nio Inc to Xpeng Inc, Li Auto Inc and WM Motor are crowding in.

At the same time, other home-grown players like BYD Co, a car maker long backed by Warren Buffett, are upping their EV game and international behemoths such as Volkswagen AG are ploughing billions of dollars into new electric line-ups.

With consumers in China overwhelmed by choice when fossil-fuel cars are added to the mix, car makers need to give motorists what they want to survive, said Jochen Siebert, MD of consultancy JSC Automotive in Singapore.

“SAIC-GM-Wuling has to come up with new ideas all the time to attract consumers,” Siebert said. The Hongguang Mini is “a kind of accessory, which means it’s a fashion item that might go out of fashion sooner or later.”

For now, it’s a strategy that’s paying dividends for Wuling. The company, owned 50.1% by Shanghai-based SAIC, 44% by GM’s China unit and 5.9% by Guangxi Automobile, sold 1.6 million vehicles last year. While that was down about 4% from 2019 amid the pandemic, Wuling’s new-energy vehicle sales almost tripled to 174,000 units.

For GM — which is doubling down on electrification and autonomous driving under CEO Mary Barra — the Hongguang Mini appears to have been a boon. The car maker saw revenue of $9.9bn  (roughly R133,573,275,000) from its China car joint ventures in first-quarter results out last month, up from $4.3bn (roughly R58,016,675,000) for the first three months of 2020. GM, which has several other partnerships in China, doesn’t break out Wuling’s revenue in its financial results.

While customer engagement has distinguished the Hongguang Mini, cost has been main driver of its blockbuster sales in a country where many find the sticker price of a Tesla Model 3, which sells for the equivalent of $39,300 (roughly R530,190), beyond reach. The basic Hongguang Mini starts at $4,500, and even the new Macaron sells for under $6,000.

Wuling has been able to churn out cheap cars thanks in part to its good supply-chain management, honed with the super-popular microvans. Many of Wuling’s suppliers have also set up manufacturing bases in Liuzhou, which has helped cap costs further. It’s a model that’s being replicated by car companies in other cities and provinces across China, flattering for Wuling but challenging too as the price of rivals’ cars come down.

Multinational car makers are also eyeing the compact EV space, with Daimler AG set to make an electric version of the Smart — for many, the consummate tiny car — in China with its own venture partner.

The global shortage of semiconductors is also weighing on Wuling, with the Hongguang Mini, despite being a basic EV, still requiring more than 100 chips. Hongguang Mini production has been hit by the shortfall, with output of the Macaron expected to be down around 15% in May, according to Zhang.

The hefty sales target for 2022 is the cornerstone of Wuling’s plan to maintain its market-leading momentum. After debuting a convertible Hongguang Mini at the Shanghai Auto Show in April, it’s aiming to release a mid-cycle enhancement of the vehicle later this year and is working on a two-seater EV targeted at younger men, Zhang said.

At a Wuling dealership in downtown Liuzhou, user-experience manager Li Zhengguang says there’s a four-person team focused solely on new media. They communicate with would-be customers using Douyin, as TikTok is known in China, and Little Red Book, a trusted social shopping platform popular with young women, sharing photos and videos. Li, who used to sell diamond engagement rings, says there’s not a lot of difference between jewellery and cars. Create desire for a cool product and buyers will come, he says.

Pitching the Hongguang Mini not as a cheap car but a coveted accessory in brand-conscious China is brilliant, JSC Automotive’s Siebert said.

“It’s become a hallmark of SAIC-GM-Wuling over the past 20 years to always surprise the market, and themselves,” he said. “They’ve done extremely well because they focus on the right things. On quality, when they were mainly making microvans, and now on marketing.”

Five things to know about the new 2021 Haval H6

The third-generation Haval H6 has arrived in Mzansi. Built on the Chinese carmaker's all-new L.E.M.O.N platform that debuted with the Jolion, this ...
Motoring
2 weeks ago

Manufacturers are setting the limits progressively higher as the years trot by. When I refer to limits I’m referring to that magical envelope where ...
Motoring
2 weeks ago