Hyundai sees a bright future for hydrogen by 2040 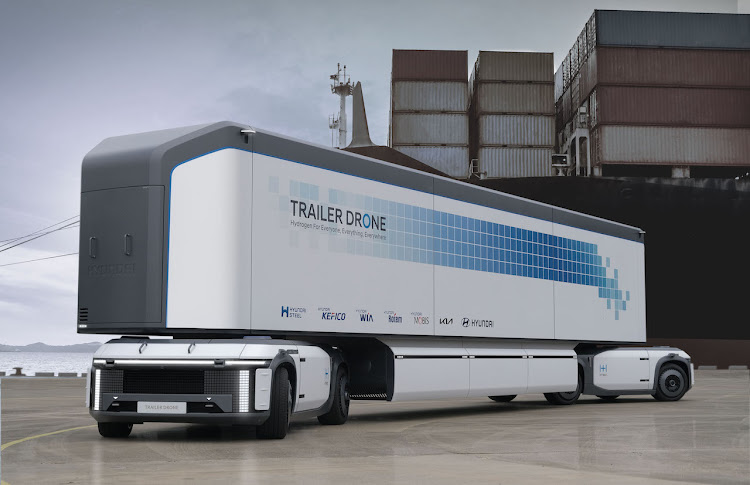 The trailer drone is an autonomous hydrogen-powered container transportation system, which has a range of more than 1,000km on a single charge and can turn sideways.
Image: Hyundai

The Hyundai Motor Group unveiled plans to roll out hydrogen-based technology and mobility solutions for transport and other industrial sectors by 2040 as many countries aim to become carbon neutral by the middle of this century.

South Korea’s second-biggest conglomerate aims to have all of its new commercial vehicles, such as buses and heavy-duty trucks, run on either batteries or fuel cells by 2028, becoming the world’s first automaker to do so, group chair Euisun Chung said on Tuesday at the company’s first day to showcase its hydrogen technology to investors. It’s also working on some concept hydrogen mobility solutions that could be used at ports, on rescue missions and trams.

“Our goal is to introduce a wide range of hydrogen-based mobility solutions by 2040,” Chung said. “This will include passenger cars, special vehicles, trains, ships and urban air mobility. We also want to expand the use of hydrogen fuel cells in different areas including robots and eco-friendly generators.”

Hyundai Motor Co. is seeking to become carbon neutral by 2045 by phasing out vehicles using fossil fuels in major markets by 2040. The parent conglomerate has been investing in hydrogen fuel cell vehicles and systems, with its first model introduced in 2013. It became the first manufacturer to commercialise heavy-duty trucks last year.

The group plans to introduce its new fuel-celled passenger vehicle in 2023 and a large sport-utility vehicle in 2025. It also plans to sell a tractor, which is currently in trial in California, in 2023. Hyundai Motor, the country’s biggest automaker, sold 5,300 fuel cell vehicles in the first seven months of this year to grab 51% of the global market, according to SNE Research.

Hyundai Motor has already unveiled some concept mobility solutions that run on fuel cells. The trailer drone is an autonomous hydrogen-powered container transportation system, which has a range of more than 1,000km on a single charge and can turn sideways. The rescue drone can be operated remotely for firefighting and life-saving missions and has the capability to move sideways, or “crab-walk”.

The group also plans to provide its fuel cell solutions to the energy sector, including electricity and heating for buildings, urban energy sources and power plants.

“We strongly believe that both battery and fuel-cell technologies and products are needed to make the transition to zero emission mobility,” Chung said. “Fighting climate change and shifting to renewable energy will not be complete without hydrogen.”

Great Wall Motors will launch an electric compact car and a plug-in hybrid SUV in Europe in 2022, it said on Monday, joining a growing number of ...
Motoring
2 weeks ago

Volkswagen head Herbert Diess on Sunday said autonomous cars, not electric vehicles, were the "real gamechanger" for the auto industry, which is ...
Motoring
2 weeks ago